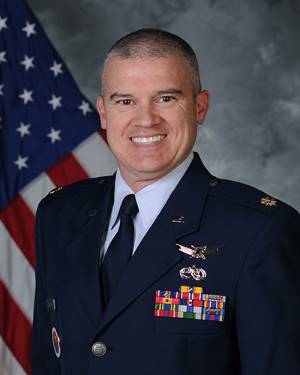 Major David L. Helton is the Operations Flight Commander at the University of Memphis, Air Force Reserve Officer Training Corps, Detachment 785. Major Helton is a professor of Aerospace Studies for the University and is primarily responsible for recruiting new cadets, overseeing cadet operations, educating and commissioning the current Flying Tigers.

Major Helton has 26 years of Air Force experience. He entered the Air Force in 1992 as an Aircraft Armament Systems Specialist and served 12 enlisted years as a weapons loader, crew chief, evaluator and instructor on the F-16 aircraft. He earned his commission as a Distinguished Graduate from Officer Training School at Maxwell AFB, AL in 2004. After serving as a Space Crew Commander, Staff Instructor and Chief of Training at the 20th Space Control Squadron Eglin AFB, FL, Major Helton returned to his passion of teaching in 2008 as an Air & Space Basic Course Flight Commander and Director of Training at Maxwell AFB. He then served as the Executive Officer for three Commanders and Assistant Director of Operations at the 561st Joint Tactics Squadron, Nellis AFB in Las Vegas, NV.

Along the way, Major Helton has earned Associates degrees in Weapons Systems Technology, Instructor of Technology Military Science from the Community College of the Air Force, Independent Studies at the University of South Carolina, and Professional Aeronautics from Embry-Riddle. He completed his Bachelor's degree in Professional Aeronautics from Embry-Riddle in 2003 and his Master's degree in Sports Management from the American Military University in 2011. He has also earned the coveted Master Instructor Award from Air Education and Training Command (AETC) as well as a civilian Occupational Instructor Certificate in a career that has saw him named Instructor of the Year in two different AETC wings, Load Crew of the Year at Shaw AFB, SC and Distinguished Graduate from Airman Leadership School (Shaw AFB) along with a host of other awards.