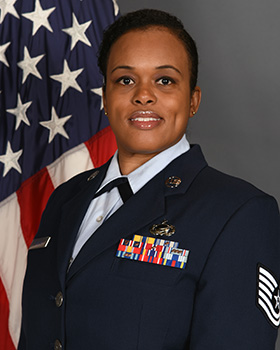 Technical Sergeant Owens is the Detachment Non-Commissioned Officer in Charge of Detachment 785, The University of Memphis, TN.  In this capacity, she is entrusted to provide the best possible support for assigned cadre and cadets with spot on processing of personnel actions covering the gamut of AFROTC programs.  She is directly responsible for all cadet life-cycle personnel actions to include records management, inprocessing, medical, physical, field training, enlistments, categorization and commissioning.  She also has oversight of all annual cadet pay actions to include tuition, fees, subsistence and textbook funds.  She also provides superior guidance towards cadets' academic success, personal goals, and military careers.