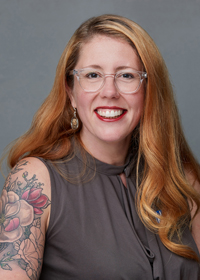 MFA in Fiction, 2011, University of Memphis
B.A. in Journalism and Russian Studies, 1998, Washington and Lee University

Courtney is the author of two novels, The Roots of the Olive Tree and Three Story House, both published by HarperCollins. Her works have been translated into German, Italian, Hungarian, Korean, Dutch, Spanish, Polish, Turkey, and Slovenian. Her debut novel was selected by Redbook Magazine to launch its monthly book club.

In addition to her novels, she has published a number of essays, fiction and poetry in Shark Reef, Green Briar Review, the Los Angeles Review, Irreantum, Memphis Magazine and Mason's Road among others.

Since beginning her writing career in 2011, Courtney's work has been an Amazon Breakthrough Novel Award Semifinalist, won the Memphis Magazine Fiction Contest Grand Prize, been nominated for a Whitney and placed in the Porter Fleming Literary Contest.