The Fogelman College of Business & Economics (FCBE) recently hosted its 24th Alumni Day Luncheon to celebrate some of the school's most distinguished graduates and honor its significant supporters.

Donald E. Godwin, Esq., who graduated in 1970 with an MS in accounting, was honored as this year's Outstanding Alumnus. He went on to complete his Juris Doctorate at Southern Methodist University Dedman School of Law. Godwin has served for nearly 40 years as a trial and litigation attorney.

Melanie Carpenter, a 2007 FCBE Executive MBA graduate, received the Outstanding Young Alumnus Award. She oversees all aspects of human resources for MAA in addition to communication, culture, and community outreach programs. Carpenter is a 2012 graduate of the New Memphis Institute Leadership Development Intensive program and holds a Professional in Human Resources certification from the HR Certification Institute. She has also served on boards for the Memphis Chapter of the Society of Human Resources, Junior League of Memphis, and Open Arms Foundation.

Rajesh Subramaniam, FCBE Board of Advisors member, was named the Distinguished Friend of the College. He oversees all aspects of marketing and communications for FedEx Services. Subramaniam is not only a member of the FCBE Board of Advisors, he also serves on several advisory boards supporting the U.S.-India Business Council, the Orpheum Theatre of Memphis, and the American Heart Association.

Donald E. Godwin, Esq. and Rajesh Subramaniam were also inducted into the Fogelman College Hall of Fame, which recognizes our Outstanding Alumni and Distinguished Friends.

The luncheon was concluded by the keynote speaker, Paul Maidment, director of Oxford Analytica's Analysis Division. He is also managing editor of its flagship publication, The Daily Brief. Previously, Maidment was principal and editor-in-chief of Bystander Media, a New York digital publishing consultancy. Before starting his own firm, he was an award-winning journalist and pioneer in digital journalism, being the founding editor of the Financial Times' website, ft.com, and then spending a decade in a similar print and online role as executive editor of Forbes magazine and editor of forbes.com. His early career was spent as a foreign correspondent and editor with The Economist and the BBC working in London, Tokyo, Hong Kong and New York. That broad range of professional experience gives him a uniquely global perspective on the changes transforming the political economy.

"All of the award winners stated importance of education and the significant impact it has had on their lives. At the Fogelman College we place great value on providing our students with an opportunity to be taught by quality educators who are at the top of their respected fields," said Dr. Rajiv Grover, dean of the Fogelman College of Business & Economics. "The faculty's commitment to research and devotion to student success allows the Fogelman College to offer an exemplary learning experience. It is both inspiring and gratifying, as an educator, to hear how these outstanding individuals were positively influenced by their teachers." 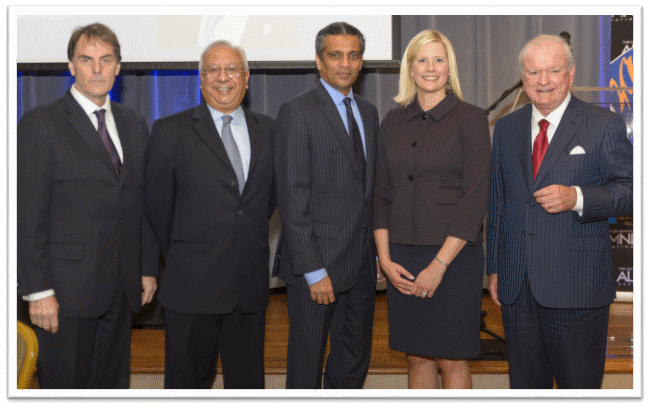