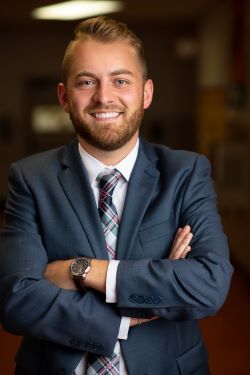 University of Memphis graduate student, Daniel Warner, was recently named West Tennessee Teacher of the Year by the Tennessee Department of Education. He has taught American History at East High School for the past six years. Warner has also previously received the New Memphis Educator of Excellence Award and is the 2019 Tennessee recipient of the James Madison Fellowship.

"It is a huge honor to be awarded West Tennessee Teacher of the Year,” said Warner. “There is a direct connection between my classroom experiences at the University of Memphis and my own East High history classroom. The political science department has given me the opportunity as a graduate student to research education policy issues while deepening my understanding of political theory and American politics. I am so thankful for a supportive department that's committed to their students as both learners and professionals."

The Teacher of the Year program recognizes and honors outstanding teachers in Tennessee. To qualify for Teacher of the Year, candidates must have been teaching full-time for at least three years, have a track record of exceptional gains in student learning and be effective school and community leaders. As West Tennessee Teacher of the Year, Warner will serve for the upcoming year on Commissioner Penny Schwinn’s advisory council.

“Daniel Warner is one of our best graduate students in recent memory,” said Dr. Matthias Kaelberer, professor and chair of the political science department. “My colleagues have noticed in their classes that Daniel must be a good teacher by the way he makes himself clear and invites other students to respond to him. His writings are well-researched, beautifully written and creative. We are simply amazed that he manages to be such a good student while teaching full time.”

Matthias continued, “In Daniel Warner, the University of Memphis will have a legacy of working among some of the most marginalized groups in society. His choice to teach at East High School, where 88 percent of students qualify for the free or reduced lunch program and only 10 percent achieve an ACT score of 21 or above, tells you a lot about the kind of person Daniel is