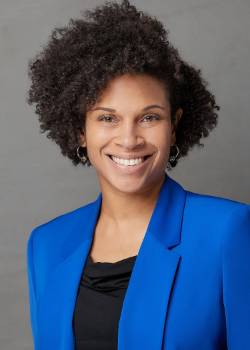 With over a decade of law teaching experience, Associate Dean for Diversity & Inclusion and Associate Professor of Law Demetria Frank joined the Memphis Law faculty in June 2013. Prior to becoming Memphis Law’s inaugural Associate Dean for Diversity & Inclusion in 2021, she served as the Program’s Director for three years. Under Dean Frank’s leadership, Memphis Law has established an extended pipeline beginning in high school and lasting through law school graduation.

Committed to bridging the gap between underrepresented communities and the legal system, Dean Frank’s scholarly research focusing on prisoner rights, systemic bias, and diversity in legal education has been published in the Harvard Journal for Racial and Ethnic Justice, Brooklyn Law Review, and Memphis Law Review among other publications. As a result of her commitment to justice and ongoing dedication to opportunity youth, in 2018 she was appointed by Mayor Lee Harris to the Shelby Countywide Juvenile Justice Consortium, for which she served as chair for two years ongoing dedication to opportunity youth and in 2020 was appointed to the United States Commission on Civil Rights Advisory Committee to serve a four-year term as a member on Tennessee’s Advisory Committee.

Dean Frank’s scholarly research focusing on prisoner rights, systemic bias, and diversity in legal education has been published in the Harvard Journal for Racial and Ethnic Justice, Brooklyn Law Review, and Memphis Law Review. She received her law degree from the University of Texas School of Law and began her legal career as a toxic tort litigation attorney before moving into the public sector as a Community Prosecutor in the Dallas City Attorney’s Office. Her tenure as an Associate Judge for the City of Dallas and the City of Houston has been one of the most influential experiences in her legal career.

In her capacity as a law teacher, Dean Frank teaches courses in Evidence, Federal Courts, and a Mass Incarceration Seminar. She hopes to inspire underrepresented attorneys for years to come.

MLK50: Where do We Go from Here, Co-authored with Professor Daniel Kiel, University of Memphis Law Review, Volume 49, 2018 (Essay)