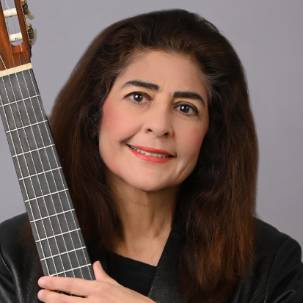 Lily Afshar, Professor of Guitar, is the recipient of the University of Memphis 2008 Distinguished Teaching Award, the 2011 Distinguished Alumni Award from Boston Conservatory, the 2000 Board of Visitors Eminent Faculty Award, the 2000 Orville H. Gibson Award for Best Female Classical Guitarist and recipient of the National Endowment for the Arts Recording Award. Chosen as "Artistic Ambassador" for the United States Information Agency to Africa, she was the winner of the Tenth, Eleventh, and Twelfth Annual "Premier Guitarist" awards presented by the Memphis Chapter of the National Academy of Recording Arts & Sciences, Inc. She has taught master classes and performed concerts world-wide in prestigious venues such as Wigmore Hall in London, the Salle Cortot in Paris, the Jerash Festival of Arts in Amman, Jordan, the Aspen Music Festival in Colorado, and the Grand Teton Music Festival in Jackson, Wyoming. A recipient of numerous state, national, and international honors, she has toured and performed new works in North, Central and South America, Denmark, Poland, England, France, Switzerland, Italy, Spain, Iran, New Zealand, Australia, Canada, and Africa. Dr. Afshar is the first woman in the world to receive a Doctorate of Music in classical guitar. She received that degree from Florida State University, a Master of Music from the New England Conservatory and a Bachelor of Music from the Boston Conservatory. She also received 3 Diplomas of Merit from the Accademia Musicale Chigiana in Siena, Italy. Dr. Afshar's articles on Castelnuovo-Tedesco and Goya are published multi-lingually. She is the author of "Five Popular Persian Ballads" and has recorded seven CD's. They are "24 Caprichos de Goya, OP. 195" "A Jug of Wine and Thou," "Possession,", "Hemispheres," which was number seven on Billboard's Classical Album Chart, "One Thousand and One Nights", her first chamber music CD, "Musica da Camera", and her most recent CD "Bach on Fire". Her book "Essential Bach Arranged for the Guitar" and her DVD "Virtuoso Guitar" are published by Mel Bay. She has released four volumes of instructional DVDs called "Classical Guitar Secrets" and "Classical Guitar Collection" with GuitarControl. Follow Dr. Afshar on facebook.