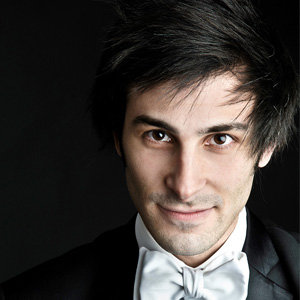 A musician of remarkable versatility, Isaac Selya has extensive experience as a conductor, pianist, vocal coach, cellist and entrepreneur. He is the founder and Artistic Director of Queen City Opera, where he has led acclaimed performances that combine high-caliber opera with contemporary relevance, including the world premiere of the critical edition of Weber’s Der Freischütz with a focus on evidence-based approaches to gun violence prevention, a production of Mozart’s Don Giovanni that featured workshops on sexual assault and consent, and the Ohio premiere of Tchaikovsky’s Iolanta in collaboration with the Cincinnati Association for the Blind and Visually Impaired. He is one of the few conductors in the world who has conducted all of Mozart’s German-language operas, and he joined the Juilliard Opera as Assistant Conductor for their production of Mozart’s Così fan tutte.

His performance of Wagner’s Siegfried was the first production of the work in Ohio in over a century. In recognition of his talent and entrepreneurialism, Musical America featured him as a Spotlight Artist. Committed to ensuring that music education is accessible to everyone, Isaac serves as a Cello Teaching Artist and conductor at the MYCincinnati Youth Orchestra, an El Sistema-inspired program in Cincinnati.

Equally at home in the symphonic repertoire, Isaac made his German debut conducting the Deutsche Kammerphilharmonie Bremen in the fall of 2018.  He has conducted the Xiamen Philharmonic, the Dayton Philharmonic, the National Symphony of Guatemala, the Chelsea Symphony, and the Cincinnati Chamber Orchestra. He has served as Assistant Conductor for Cincinnati Opera and the Glimmerglass Festival, where he conducted the first-ever reading of the revised version of Philip Glass’s Appomattox, with the composer present. He was recently named an inaugural Conducting Associate at the Defiant Requiem Foundation, which presents performances of Verdi’s Requiem in commemoration of artists interned at the Terezin Ghetto, who performed Verdi’s Requiem in defiance of the Nazis.

Isaac’s work can also be heard on the soundtrack to the award-winning video game, Masquerada: Songs and Shadows. He started his professional music career at the age of 18 singing in the chorus of the Great Synagogue in Jerusalem. He holds a BA from Yale College, where he was principal cellist of the Yale Symphony and sang in Yale’s Schola Cantorum. He completed an MM in conducting at Mannes College, where he won a competitive grant from the New School Green Fund to present a concert dealing with environmental advocacy. And he holds a doctorate from the University of Cincinnati-College Conservatory of Music, where his research focused on Mozart’s use of the baritone voice. His scholarship on Weber’s Der Freischütz was included in the 2019 edition of the Weberiana Journal of the Internationale Carl Maria von Weber-Gesellschaft. He has also contributed scholarship to publishers Bärenreiter, Schott, and the University of Chicago Press/Casa Ricordi by identifying misprints in the critical editions of the works of Mozart, Verdi, Weber, and Wagner.