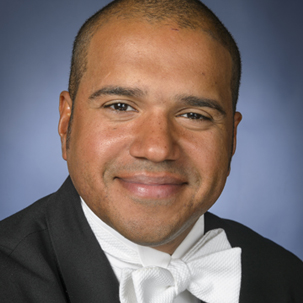 Armand Hall, Assistant Professor and Associate Director of Bands, conducts the Symphony Band and teaches courses in Music Education.  He earned his Doctorate of Music Arts in wind conducting at Michigan State University and Master of Music and Bachelor of Music degrees in music education from the University of Michigan. From 2002-10, Professor Hall served as director of bands at Dunckel Middle School and, from 2003-09, Assistant Director of the North Farmington High School "Raider" Marching Band in Farmington Hills, Michigan.

Dedicated to teaching, he is the educational director for the Archipelago Project, a non-profit organization charged with engaging students in music and their instruments by teaching multiple folk idioms using pedagogical techniques based on the Venezuelan El Sistema. With the Archipelago Project, he has traveled throughout the country and Venezuela teaching music students and performing for their communities.  He is also active as an adjudicator and clinician; and is a member of the College Band Directors National Association, National Association for Music Education, College Music Society, Michigan School Band and Orchestra Association, Phi Mu Alpha Sinfonia Fraternity of America, and Kappa Kappa Psi National Honorary Band Fraternity. Mr. Hall joined the Rudi E. Scheidt School of Music in 2012.