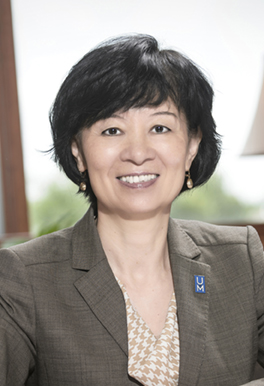 Dr. Zhan is the nursing dean and a tenured professor of the Loewenberg College of Nursing at the UofM. Dean Zhan is a Wharton Executive Fellow and a Fellow of the American Academy of Nursing (FAAN). Dean Zhan provides outstanding and extensive professional services to higher education, the nursing profession and the healthcare community on local, regional, and global levels.

Dean Zhan was a Research Fellow at the Institute for Asian American Studies at University of Massachusetts (UMass) Boston and a Research Fellow at Boston's Hebrew Rehabilitation Center for Aged where she studied family care giving for persons with Alzheimer's disease under the NIH K24 Grant. Dean Zhan has served as consultant for UMass Boston and Lowell funded HRSA grants for Nursing Workforce Diversity.

Dean Zhan's scholarly work extends to serving as a reviewer for refereed journals of Nursing Education, Nursing Research, Advanced Nursing Sciences, Nursing Reports (Online journal in United Kingdom), and on the Editorial Board for the Journal of Gerontological Nursing. Currently, Dean Zhan is the principle investigator who conducts funded research to understand how dementia patients and their families are using the Internet and to assess if computer games help dementia patients and their families.

Dean Zhan has served as consultant for Partner Harvard Medical International for the project to establish the first National Institute of Health Sciences in Islamabad, Pakistan, 2008-2011 and for Health Resources & Services Administration (HRSA) funded projects such as the "Nurse Scholars Program" ($1.3Million) and the "Bring the Best to Nursing" ($770k) which involves recruitment and retention of minority students to nursing (PI: Dr. Linda Dumas, U. Mass Boston College of Nursing and Health Sciences, 2007-2010; 2003-2006).

Dean Zhan serves on Le Bonheur National Leadership Council Board and in this capacity, she works collectively for wellness and health of children, their families, and the community.

Dean Zhan has provided service for the American Academy of Nursing (AAN) including as an elected member on the Fellow Selection Committee member (2016-2020); Member of the Expert Panel on Aging (2002-present) and Global Health (2015-present); serving on AAN’s Diversity and Inclusivity Committee (2018-2020). Dean Zhan has provided extensive service to the American Association of Colleges of Nursing (AACN), including serving on the AACN Diversity Advisory Group (2015-2017), AACN Board of Directors (2017-2019), AACN Board Treasurer (2019-2021), chairing AACN Finance Committee, and as AACN’s Board Liaison to the Diversity and Inclusion Committee (2017-2020), and Essentials Revision leadership team (2019-present).

In 2007 she was invited by the United States People to People Ambassador Program to lead the U.S. Health Care Education and Leadership Delegation to P.R. China. She served as a consultant for Partner Harvard Medical International (Boston) in an effort to establish a College of Nursing and Midwifery and Institute of Health Sciences in Islamabad, Pakistan. She also consults for the Square College of Nursing in Bangladesh. Currently, she serves as senior consultant for Shanghai San Da University and Jining Medial University in China to advance nursing.