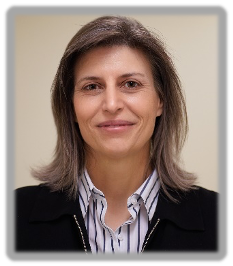 It is a pleasure to feature Michele Wilson—an  alumna of the Physics Department of the University of Memphis (B.S 1993). She has worked on projects covering a wide range of technical topics for organizations such as the Tennessee Department of Environment and Conservation, Teledyne Brown Engineering, Photon Research Associates, and Davidson Technologies. This provided opportunities to apply physical principles (along with those of other disciplines) to projects as diverse as waste water monitoring and treatment to those involving launch and intercept systems and supporting space exploration. In addition to applying her technical skills, she has also taken on the responsibilities as a program manager. We are grateful that Michele has taken the time to share some reflection on her journey — from her initial awakening of the wonders of science to her time as a physics student at the University of Memphis. Finally, she shares valuable insights for prospective and current students as well as the motivating example of her career path. She illustrates some of the ways that the study of physics can foster growth in conceptual understanding and the development of skills. These are important factors (among others) in preparing for, and supporting, a career requiring continual learning and contributing towards the solution of some of the most challenging technical problems facing our society. We hope that you enjoy and find it to be a source of ideas and inspiration. -GB

Hi....my name is Michele Wilson (B.S. 1993). I was a proud member of the UofM Society of Physics Students, and still have my SPS shirt with Schrodinger's equation on the back. I loved studying Physics, and the UofM Physics Department really felt like home to me in my time there.

My college journey started out at a very big, out-of-state University renowned for its Engineering program. I was in the Aerospace Engineering program, which I had decided would be my major at the age of 8 when I saw Star Wars and my Dad took me to Kennedy Space Center the same year. My first Physics class had over thousand students in it – we took night time tests and had to present ID to be issued a test. It was a major culture shock for me, coming from a small town in West Tennessee where I had been one of the smartest in my graduating class. I figured out when I took Theoretical and Applied Mechanics – a 5 hour class that combined Statics and Dynamics in one semester –that I did NOT think like the students who were good at engineering. And that, plus the near failing grade, was enough for me to question the goal I set for myself back when I was still in single digits. I dropped out for a few years and didn't really know what to pursue.

I always loved science though, so I decided to go back and study Physics, which is what lead me to UofM. When I showed up on campus to register one cold January day, they sent me to Manning Hall, where I walked in the office and met Dr. Robert Marchini, who would become a long-time friend and mentor. I'll admit that I was a little worried about the upper level classes – but as Dr. Marchini and Dr. Michael Garland, the department chair, conversed in bad puns and told funny stories about Physics department mishaps, I felt more at ease. I should say at that time, the UofM Physics Department was leading the trend of women in STEM; probably half of the physics majors during my years there were women. It wasn't long before I felt like I had found a place that welcomed science geek girls like me.

One of my first classes was Dr. Marchini's Theoretical Physics, using Mary L. Boas' "Mathematical Methods in the Physical Sciences." No write up about my Physics journey would be complete without a shout out to this class, Dr. Marchini and Dr. Boas. I loved that class and that book. It was really the first class that helped me understand how the higher-level math I had taken could be used to describe the real world.

Another shout out -- I was fortunate to have a great work-study job in the Physics Department cleaning the machine shop down in the basement. Not that much cleaning was required, because John Daffron, the machinist who ran the place, kept it spotless. He taught me one of the most important things I ever learned – never pick up something heavy without knowing where you are going to put it down. Eventually, I convinced him to teach me how to operate all the machines, and I still have my custom-machined, aluminum stock paperweight on my desk at work.

Today, I work for Davidson Technologies, a small defense contractor in Huntsville, AL. The majority of my career has been on the Ground Based Midcourse Defense (GMD) system. I'm currently working as a project manager / test engineer in the GMD program's hardware-in-the-loop test lab – where we integrate and test hardware and software updates with an inert interceptor and the flight representative ground test equipment. The GMD system is part of the United States' antiballistic missile defense, and is the only system to counter the threat of intercontinental ballistic missiles. During a recent flight test, I was privileged to sit on the communication network at the launch site at Vandenburg AFB during the test. I took my son and husband out for the test. They were watching from the hill and got to see both interceptors come out of the ground, as can see in this video. More information about the GMD program is available here.

I also serve as the Program Manager over Davidson's GMD and Space Launch System (SLS) contracts. SLS is the NASA rocket in development to return mankind to the moon (more information here). The picture below was taken in front of a friction-stir welding fixture used to construct the dome ends on the LOX (liquid oxygen) and LH2 (liquid hydrogen) fuel tanks for the Artemis core stage at NASA's Michoud Assembly Facility in New Orleans. 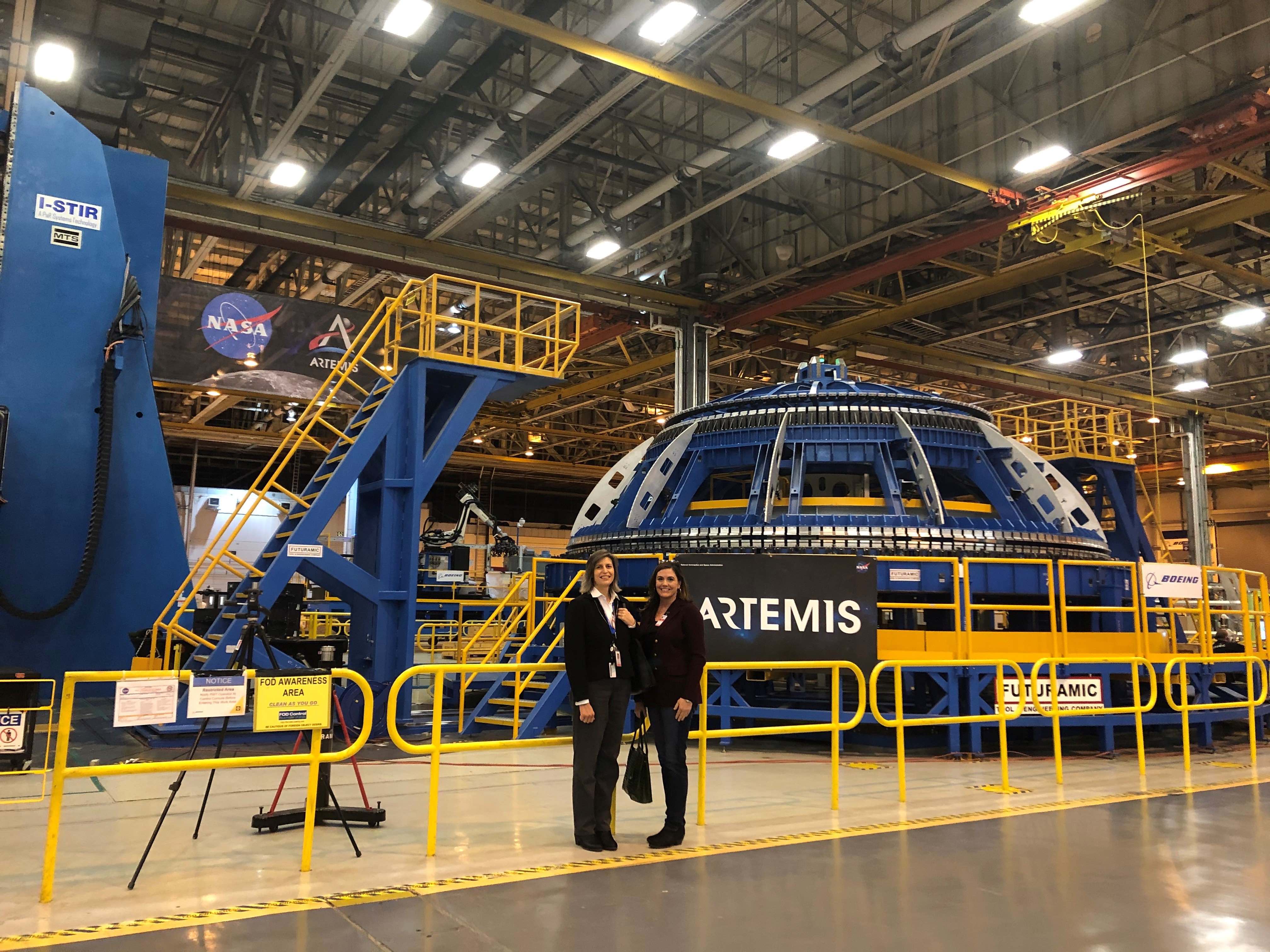 Even though I wouldn't say that I planned my career out when I was younger, I'm very proud of what I've accomplished professionally. My work has helped defend the people of this nation from the threat of a nuclear ICBM attack – which was a very real possibility when I was growing up in the 1980s. And while I didn't personally set hands on the SLS systems, some of my direct reports have. When the Artemis rocket launches and the next astronauts step on the moon, I'll be able to say I was part of that.

Physics is truly a cornerstone in my life and career. It gives such a wide understanding of how things work in the world, of how they work together, and of science in general. It taught me how to develop integrated solutions, which is a difficult and valuable skill. I've noticed in my career that there a lot of very smart people that understand in great detail how specific things work, but not as many that can look across a complex, integrated system and understand how changes will ripple and impact. Studying physics gave me that basis.

My advice to students considering majoring in Physics, and particularly to all young women, is to not be afraid of it. The classes are hard (and so is the math!), but if you loved science in school, the understanding you gain is totally worth it. I studied Quantum Physics and understand the basics of sub-atomic particles, but I also took Environmental Physics and understand the basics of atmospheric heat transfer and weather. It'll give you a basis across so many things – and that will allow you to decide to focus later on a particular area or remain broad and develop integrated solutions to complex problems.

And my other advice is something they probably already have heard – stay in school to get your Master's or PhD, if that is one of your goals. One of my biggest regrets is not finishing my Master's degree. I left the Master's program right after I got married for the worst of reasons, I just didn't want to do homework anymore.

For students currently in the program, I think I would give two recommendations. (1) Pursue internships. Anything that can help develop professional contacts and networks, or can help distinguish them from other graduates is worth pursuing. It will help you get a job later on, and help you figure out what areas you do and don't like. (2) Lean on the professors to help if you're struggling, and be tenacious about it. The way it was explained in class, or in the book, might not be the way that you need to connect the dots. I knew how to solve differential equations after I took the class, but it wasn't until Dr. David Prices' Electrodynamics class that I was able to say, "that's what they're for!" Just keep at it.

And most importantly, Physics people love puns (I find dark energy repulsive) and even the engineers are impressed when you tell them you majored in Physics. 😀 So if that's you; Physics is where you need to be.