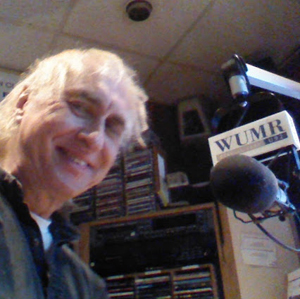 David Saks is heard on Saturday evenings from 9 p.m. until Midnight Central time on WUMR, and throughout the school year. He is one of U92's long-time on-air personalities.

David Saks began as a volunteer at the University of Memphis's (formerly named Memphis State University) campus radio station, WTGR (TGR for Tiger Radio) in 1969 just prior to the beginning of his senior year in high school. He first attended the U of M where in 1970 and majored in music.

Radio and the associative technological aspect of it has always fascinated David. He began as a shortwave listener at the age of six and his amateur radio license, WK2B, is still active.

David plays music from the period between bebop and the 1960s' and focus on music that blends jazz elements with other musical styles, such as funk, soul, electronic dance music, and free improvisation. Bebop is a favorite with its fast tempo, instrumental virtuosity, improvisation and interesting harmonic structure that focuses on the melody.

David has demonstrated empathy and compassion for those less fortunate, has made special effort to assist in community endeavors for the physically challenged, and has supported community service efforts for St. Jude Children's Research Hospital founded by entertainer Danny Thomas.

David has been a radio personality in Memphis for more than four decades. He started working for the ten-watt, campus radio station known as WTGR in 1969 at age 17.

David Saks also worked with Rock 103 from 2002 until 2004, as part of the Wake Up Crew. He had been a frequent guest on their program.

He attended Rhodes College and the University of Memphis.

In 1972, David was a guest in the Cambridge, Ma. home of Professor John Kenneth Galbraith ("The New Industrial State"), Department of Economics at Harvard University and United States' ambassador to India under President John F. Kennedy.

In 1974 he spent a year working and studying in Israel along with students from Harvard, Yale, Princeton, Colgate, Baylor and Oxford Universities. In 1975 he was a piano student of Art Bayer at the San Francisco Conservatory of Music, and the late Herbert Hermann at the University of Memphis. He's played Steinway Hall in London and New York and included in the Steinway Registry.

David is also a licensed real estate professional and has dedicated himself to addressing the needs of fair housing while aggressively opposing predatory lending.

On August 16, 1977 David was visiting Graceland, the home of Elvis Presley, and left shortly before Elvis was found unconscious and taken to the hospital. On January 8, 1993, Elvis' birthday, David was honored by Graceland and the United States Postal Service as the recipient of the first officially canceled Elvis Presley first day cover, recognized by the American Philatelic Society as a great national treasure.

David, along with other students, placed WLYX, Lynx Radio, at Southwestern College at Memphis (now Rhodes College), on the air in 1971. He was a periodic and regular contributor to the station hosting his own program throughout the years 1971 through 1992.

The station was destroyed by a construction accident when an earth mover tore the support wires out of the ground supporting the antenna tower. The antenna cable was pulled through the back of the main transmitter wall. WLYX was a legacy of great entertainment for the Memphis community and surrounding area, and was the voice of Southwestern / Rhodes college for more than twenty years. The equipment was damaged beyond repair and the administration and the faculty abandoned the idea of rebuilding the radio station.

He was honored with a scholarship from Rhodes and returned to college in 1991.

David was a regular contributor to WLYX, hosting his own show, before Southwestern sold the station's license to then Memphis State University in 1982, and has returned to the University of Memphis.

In 1990, the pianist and composer was honored by the Memphis City Council by having two of his songs, "In Memphis" and "One Last Bridge", adopted as the "Official Songs of Memphis" in unanimous resolutions. His music manuscripts are in the Library of Congress.

More information about David at: U92 DJ Answers Questions On Career