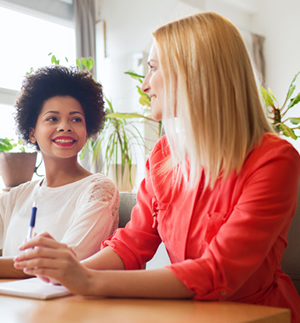 "In a meeting about feminism, a white woman and a black woman were discussing whether all women were by definition, 'sisters,' because all women faced a common oppression by men. The white woman asserted that the fact that they were both women bonded them, in spite of racial differences. The black woman disagreed. 'When you wake up in the morning and look in the mirror, what do you see?' she asked.

'I see a woman,' replied the white woman. 'That's precisely the problem,' responded the black woman. 'I see a black woman. To me, race is visible every day, because race is how I am not privileged in our culture. Race is invisible to you, because it's how you are privileged. It's why there will always be differences in our experiences'" (Kimmel & Ferber, 2003, p.1).

Our cultural identities are based on a variety of interacting and often times intersecting influence. The social context, or macroculture, explained earlier, is composed of a variety of smaller microcultures. The imagery of an identity wheel can help illustrate this concept. Think about the variety of groups with which you identify: gender, race, athletics, etc. Below you will find an identity wheel. It is helpful to think about how you would describe your affiliation with each of the listed microcultures. You may even come up with a few that are not specifically listed on the wheel. As you think about how you fit into these identity groups, try to identify the identities you think about most often and least often, which you would like to learn more about, and the ones that have the strongest effect on how you see yourself. 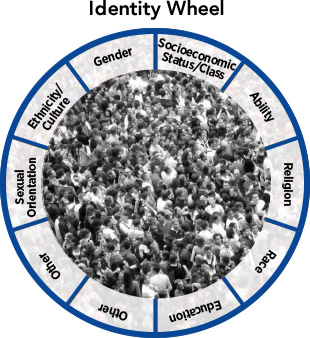 How intersectionality may cause conflict

When working in a team, conflict may arise if there is disagreement with regard to how you perceive yourself and how others in your team perceive you. Conflict might occur if weight is placed on one aspect of your identity (for example, your gender or race) when you do not see that as being relevant to the matter at hand.

For example, in a meeting of an organization that focuses on lesbian, gay, bisexual, and transgender (LGBT) issues, a student of color may feel that his/her issues are about race and how the LGBT community silences racialized experiences or ignores race issues in that community.

Another student, a woman who is lesbian-identified may feel as if this aspect of her identity is ignored in a group of students who have a primary focus on another identity issue. This particular conflict deals with how issues around sexuality are not valued and can, in fact, be invisible within conversations of women's oppression or race.

The prioritization of these values is rooted in intersecting identities. It is important that when you work within a community to be cognizant of the fact that multiple identities do occur and make it a priority to let all voices be heard.

How might identities conflict between groups, within groups, or inside a single person?

There are many ways in which identities may conflict. Hopefully the example above helps you think about specific examples in which conflict may occur. It's important for you to recognize that when you work in a team, conflict may arise if there is disagreement with regard to how you perceive yourself and how others in your team perceive you. Conflict might occur if weight is placed on one aspect of your identity (for example, your gender or race) when you do not see that as being relevant to the matter at hand.