Theoretical and computational approaches to investigate underlying molecular processes in macromolecular systems and in nanomedicine.

Our group is interested in developing and applying theoretical and computational approaches to investigate underlying molecular processes in macromolecular systems and in nanomedicine. Over the years, we became involved in several different projects. Below gives a short summary of each project on how we began and what we have achieved and what we are currently focusing on.

Plasmonic Properties of Metallic Colloidal Particles
Metallic colloidal nanoparticles such as gold or silver have very interesting plasmonic properties and have many interesting applications such as sensing or imaging. We became involved in this area of study mostly because of Dr. Xiaohua Huang who joined us here as a faculty member at Memphis. Dr. Huang worked with Prof. Mostafa El-Sayed during her Ph.D. training at Georgia Tech and she developed bioconjugated gold nanorods to kill cancer cells with photothermal therapy. Research activities in her group focus on the use of these novel metallic nanoparticles in biomedical applications, and we are intriqued in understanding the plasmonic properties of these metallic nanoparticles. Together, we hope to establish a better structure-property relationship of these metallic colloidal nanoparticles, particuarly those anistropic core-shell structured nanoparticles. 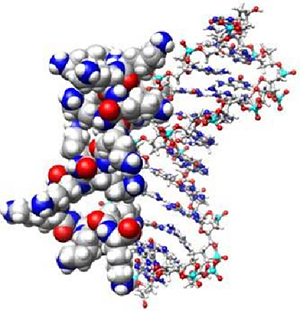 Polymer are often used as delivery vehicles in gene and drug delivery systems since polymer chemists are capable of synthesizing and tailoring their srucutres in many different ways. When gene therapy became possible since early 1990's, polymer was sought after as a substitute of viral-based delivery vector since viral based delivery vector poses unknown immune responses. The strucutral aspect of how cationic polymers complex with nucleic acids and how these polymer cations assist in the successful gene delivery is what we aim to get a fuller understanding. We have been working in this area since 2008. Learn more about what we have achieved so far in this project by following the link.