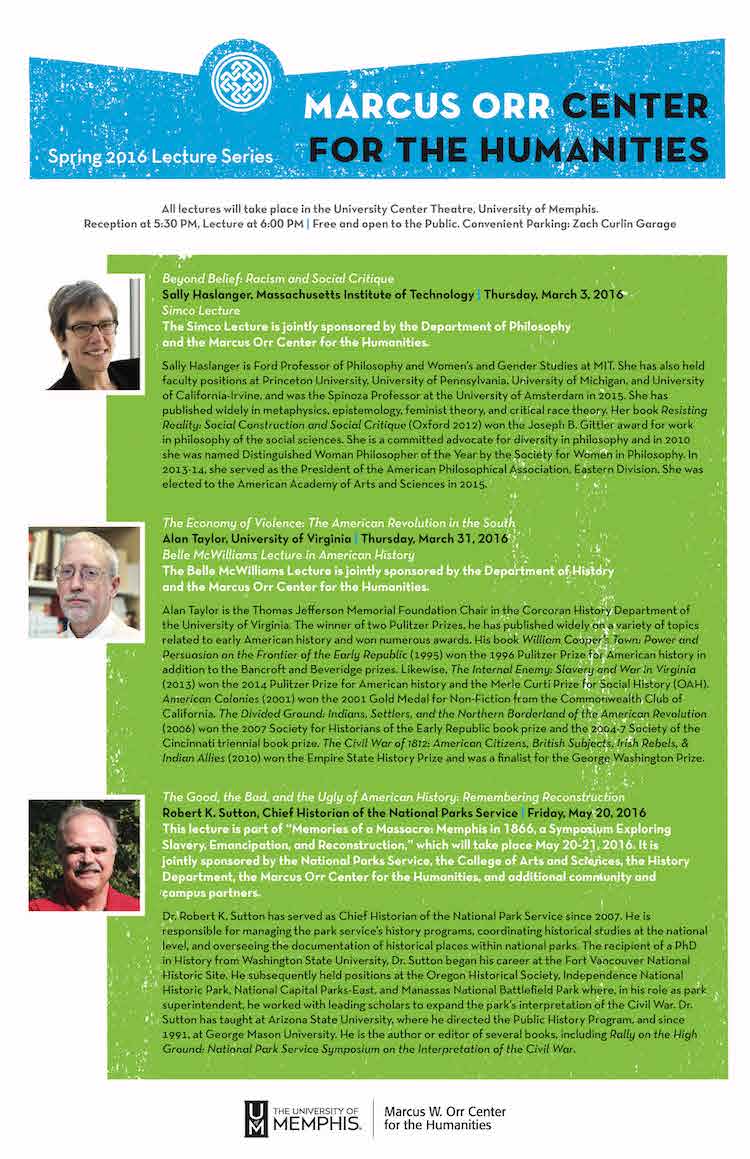 All lectures will take place in the University Center Theatre,
University of Memphis
Free and open to the Public
Convenient Parking: Zach Curlin Garage

Beyond Belief: Racism and Social Critique

Racism, sexism, and other forms of injustice are more than just bad attitudes; after all, such injustice involves unfair distributions of goods and resources. However, bad attitudes, especially beliefs, play a role: racist and sexist attitudes - often implicit - distort and obscure important facts about social groups and result in a failure to recognize their interests. To capture the collective force of such attitudes, some have employed the notion of ideology and suggested that ideology critique involves changing bad attitudes through articulation and reasoned debate. Haslanger argues, however, that ideology is more complex than sets of bad attitudes and challenging beliefs is not always the most effective strategy for social change. But what other non-violent means is available?

Sally Haslanger is Ford Professor of Philosophy and Women's and Gender Studies at MIT. She has also held faculty positions at Princeton University, University of Pennsylvania, University of Michigan, and University of California-Irvine, and was the Spinoza Professor at the University of Amsterdam in 2015. She has published widely in metaphysics, epistemology, feminist theory, and critical race theory. Her book Resisting Reality: Social Construction and Social Critique (Oxford 2012) won the Joseph B. Gittler award for work in philosophy of the social sciences. She is a committed advocate for diversity in philosophy and in 2010 she was named Distinguished Woman Philosopher of the Year by the Society for Women in Philosophy. In 2013-14, she served as the President of the American Philosophical Association, Eastern Division. She was elected to the American Academy of Arts and Sciences in 2015.

The Economy of Violence: The American Revolution in the South

Alan Taylor is the Thomas Jefferson Memorial Foundation Chair in the Corcoran History Department of the University of Virginia. The winner of two Pulitzer Prizes, he has published widely on a variety of topics related to early American history and won numerous awards. His book William Cooper's Town: Power and Persuasion on the Frontier of the Early Republic (1995) won the 1996 Pulitzer Prize for American history in addition to the Bancroft and Beveridge prizes. Likewise, The Internal Enemy: Slavery and War in Virginia (2013) won the 2014 Pulitzer Prize for American history and the Merle Curti Prize for Social History (OAH). American Colonies (2001) won the 2001 Gold Medal for Non-Fiction from the Commonwealth Club of California. The Divided Ground: Indians, Settlers, and the Northern Borderland of the American Revolution (2006) won the 2007 Society for Historians of the Early Republic book prize and the 2004-7 Society of the Cincinnati triennial book prize. The Civil War of 1812: American Citizens, British Subjects, Irish Rebels, & Indian Allies (2010) won the Empire State History Prize and was a finalist for the George Washington Prize.

The Good, the Bad, and the Ugly of American History: Remembering Reconstruction

Dr. Robert K. Sutton has served as Chief Historian of the National Park Service since 2007. He is responsible for managing the park service's history programs, coordinating historical studies at the national level, and overseeing the documentation of historical places within national parks. The recipient of a PhD in History from Washington State University, Dr. Sutton began his career at the Fort Vancouver National Historic Site. He subsequently held positions at the Oregon Historical Society, Independence National Historic Park, National Capital Parks-East, and Manassas National Battlefield Park where, in his role as park superintendent, he worked with leading scholars to expand the park's interpretation of the Civil War. Dr. Sutton has taught at Arizona State University, where he directed the Public History Program, and since 1991, at George Mason University. He is the author or editor of several books, including Rally on the High Ground: National Park Service Symposium on the Interpretation of the Civil War.