Home Driven by Doing The Next Big Thing

The Next Big Thing

Is there another Frederick W. Smith just waiting to burst onto the scene in Memphis? Five University of Memphis students might have the answer via innovative projects they are working on in the Crews Center for Entrepreneurship.

It is no great secret that Memphis has always been a hotbed for entrepreneurship; the city has regularly produced startups that have changed the way the world does business (think Fred Smith and FedEx; Kemmons Wilson and Holiday Inn; Tom Watson and Armstrong Relocation). Just last year, CNN Money recognized Memphis as one of the 10 best places in the U.S. for startups. The question really isn't if the city can produce another juggernaut — but who will be the mastermind behind it.

Five University of Memphis students are vying for that title as first-generation FedEx Institute of Technology Entrepreneurship Fellows. The five are receiving a stipend to work at the UofM's Crews Center for Entrepreneurship to develop their high- growth-potential startups. A rigorous selection process included some of the city's top entrepreneurs, including Hilliard Crews, who donated $1 million to help establish the Center, and local businessman Ben Bryant.

"This is a great group of students and they each clearly have great potential to be successful entrepreneurs and to build the next generation of startups here in Memphis," says Crews. "It is time to step up and make this a place where entrepreneurship is nurtured and where people can transform ideas into scalable companies."

So who are these five innovators and what projects are they working on? Let's explore their motives and thought processes as we discover what might be the next big thing out of Memphis. 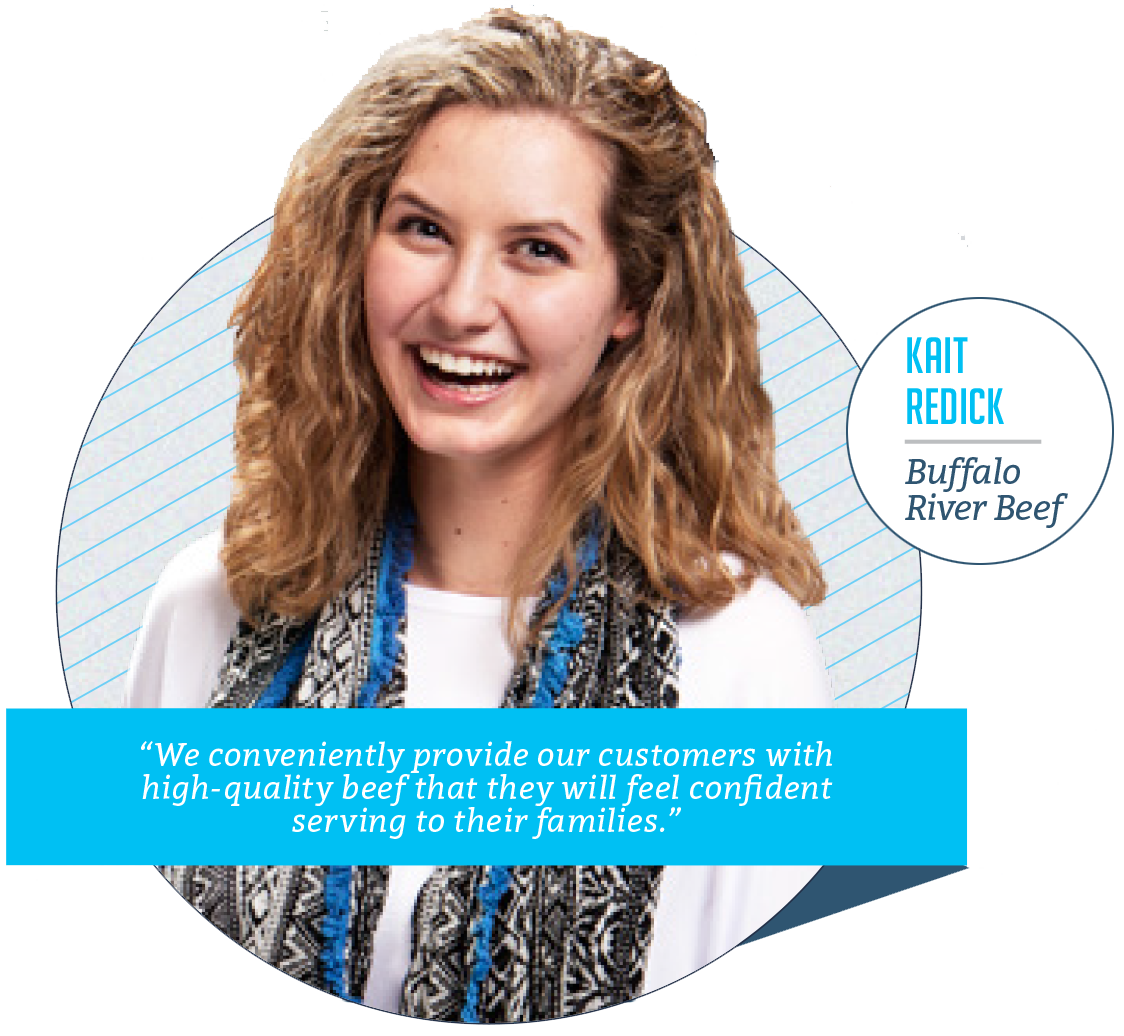 Junior Kait Redick went looking for greener pastures, so to speak, to reach her goal of "creating a profitable business with a philanthropic mission — while also improving the lives of our future customers."

"I am creating a website platform where cattle farmers can sell their beef in bulk directly to consumers," says Redick, a marketing management major from Eads, Tenn. "Buying beef in bulk gives individuals the opportunity to save money, gain confidence and know exactly where their food is coming from. The cattle we sell and the setting they come from are similar to what your great-grandparents raised for their families: grass-fed, acres and acres of green pasture to roam, humane treatment and most importantly, healthy.

"We conveniently provide our customers with high-quality beef that they will feel confident serving to their families," she says. "Our website will coordinate everything for the customer, so their experience is very seamless and simple."

For Redick, it is important that her company, Buffalo River Beef, gives back to the community.
"I would like to focus some of our efforts to help stomp out hunger in the world," she says.

What does it mean to Redick to be an entrepreneur?

"It is important not to stress about following the path that has been carved by others, because we are creating our own paths," she says. "I believe that entrepreneurs owe it to society to share their ideas so that everyone else may benefit from their findings. Just think how different we would be today if Steve Jobs just settled and kept quiet about his ideas." 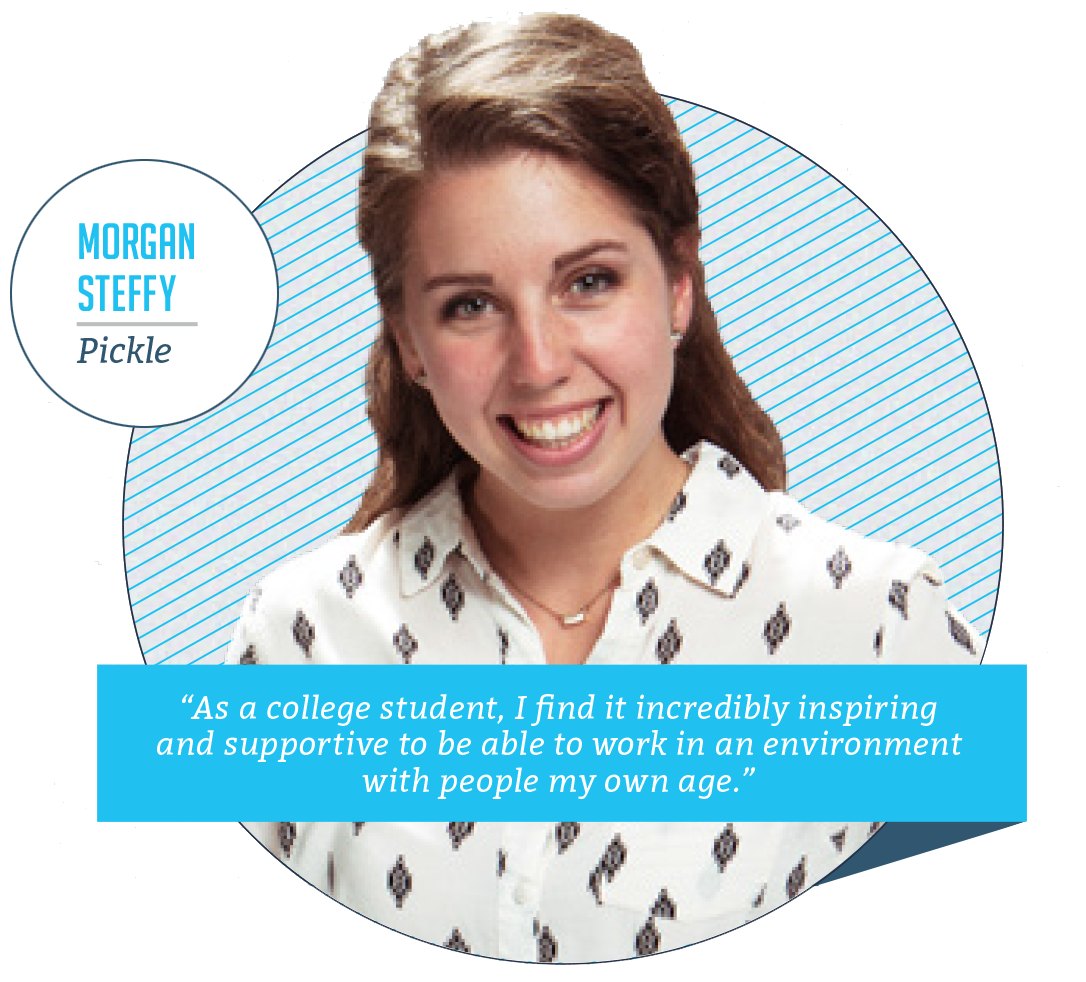 Morgan Steffy can already count 230,000 reasons why her startup has an excellent chance to succeed.

"While my idea first started as a clothing/what-to-wear app, it has since morphed into a mobile app for competitive selfies and photo-sharing that is called Pickle," says the computer science major from Lancaster, Pa. "Users upload photos to contests such as 'Cutest Pet' or 'Most Appetizing Lunch' and other users vote for the winner. It is a great way to pass five minutes while waiting in line and a good place to put your selfies and random photos to use. We're hoping to change the way people compete with photos, and we've already had 230,000 photos uploaded."

Photo-based apps such as Snapchat and Instagram have been wildly successful, making their founders wealthy. Pickle is throwing its name into the ring.

Steffy says the switch from a what-to-wear app to a competitive selfie app occurred because of research at Crews. What else has the Center done to assist her goal?

"While the mentorship, computers, books and office supplies have all been great, the biggest help has been the support that comes from being in an ecosystem among peers," she says. "As a college student, I find it incredibly inspiring and supportive to be able to work in an environment with people my own age and same life stage who are also doing incredible things with their companies.

"The Memphis entrepreneurial scene has great momentum right now and it's exciting to see the UofM empowering and enabling college students to start companies right where they live." 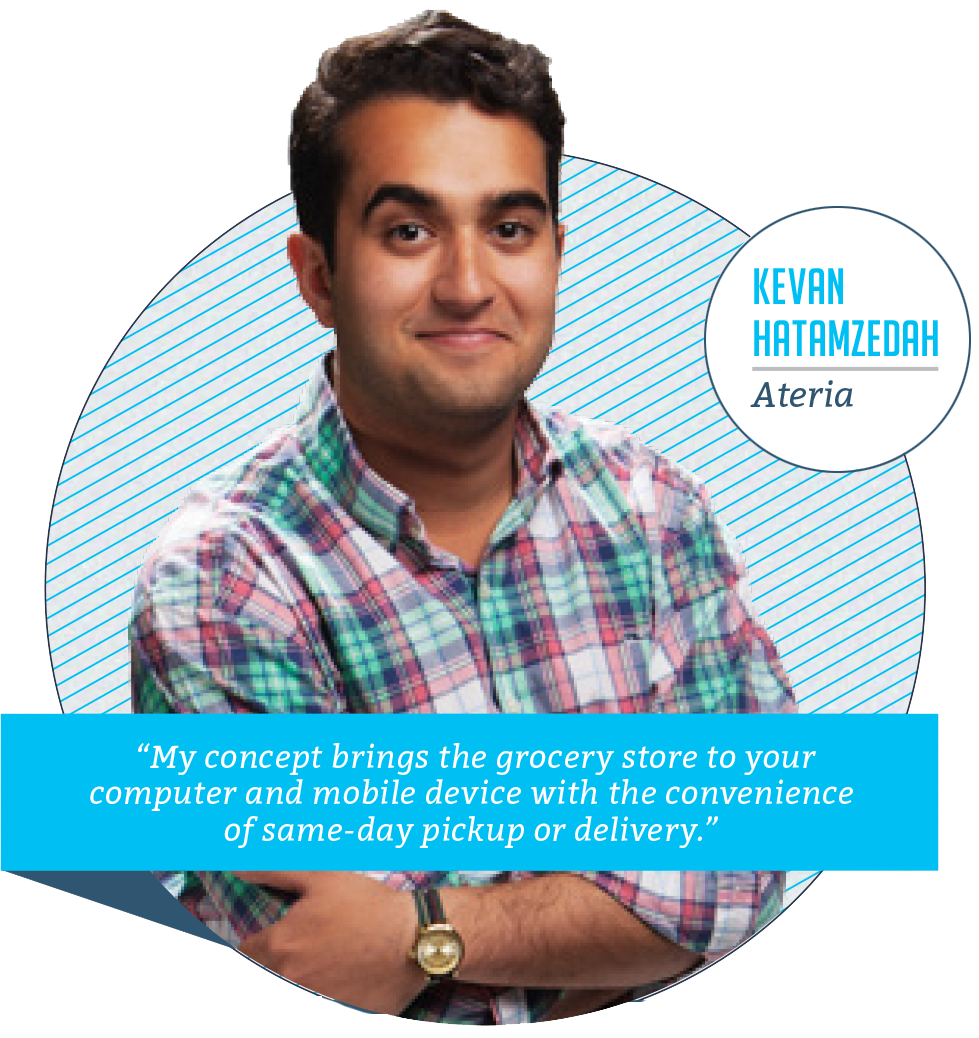 College freshmen moving away from home for the first time face a multitude of challenges. UofM junior finance major Kevan Hatamzedah was no different.

"Upon entering college, grocery shopping seemed like one of the hardest things to do," he says. "Not only did I not know what to shop for, but I also found that I had less time to actually go grocery shopping. This led me to think about how one could reinvent the shopping experience to make it more convenient and efficient for people like myself who have trouble choosing groceries.

"My concept brings the grocery store to your computer and mobile device with the convenience of same-day pickup or delivery. There have been many failed attempts at this concept, but I feel like we have a winning formula through logistics, cost cutting and marketing."

The country's changing demographics are another reason Hatamzedah believes his company will succeed. "The number of single-parent households has nearly doubled in the past 50 years, more people are living in urban areas and my tech-savvy generation is starting to enter the workforce," he says. "Single parents likely work full time and may not have time for grocery shopping; urbanites face a lack of options for grocery shopping; and millennials are looking for cutting-edge ways to accomplish daily tasks. My concept, Ateria, provides the answers."

Hatamzedah may be the Crews Center's biggest fan. "When you enter the building and explore, it feels like you are in a Silicon Valley operation," he says. "I don't take the resources for granted." 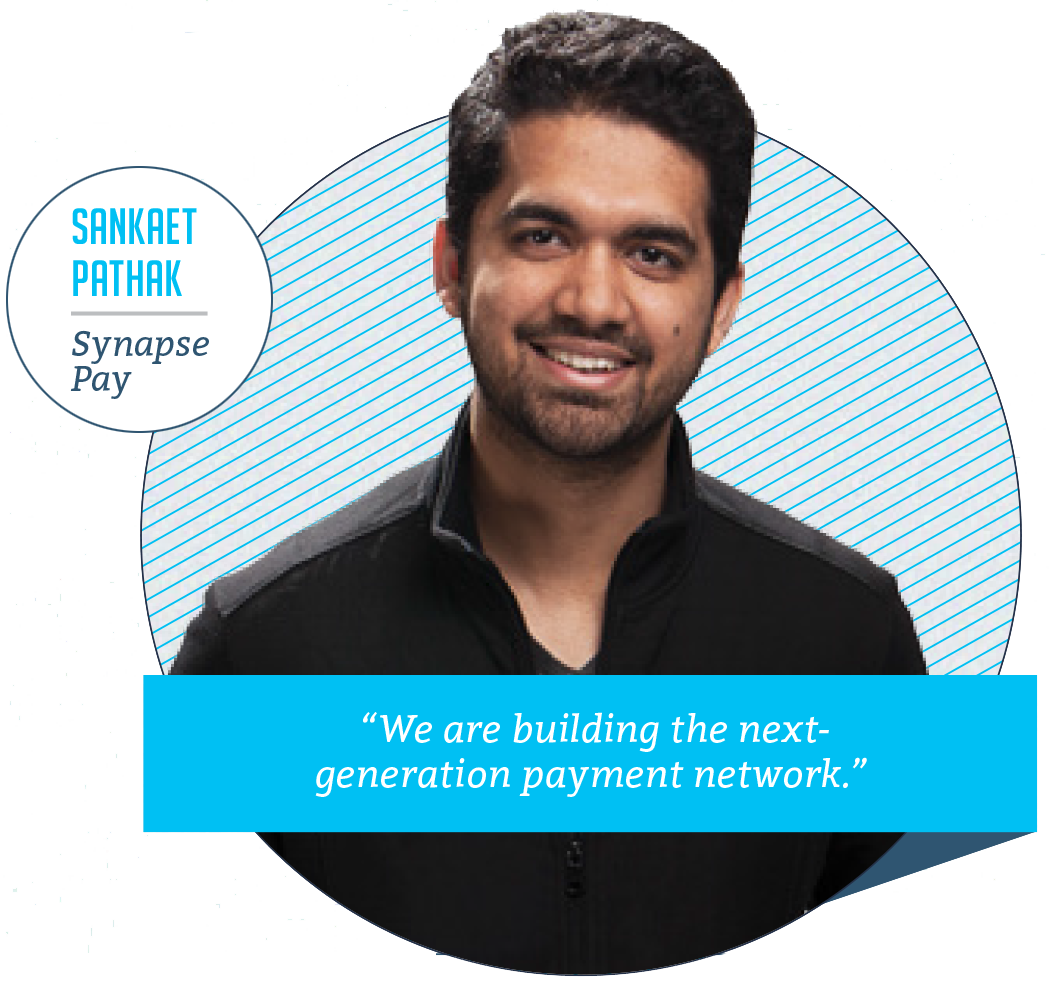 Ask FedEx Fellow Sankaet Pathak whom he would fancy a dinner with, and the answer might surprise you:

"I would give up anything to have an immersive conversation with Aristotle or Plato," says the computer engineering graduate student. "Most of my role models are scientists, philosophers and artists like Nikola Tesla, Albrecht Durer, Bill Watterson, Arthur Conan Doyle and Steve Jobs — but rarely businessmen."

Thinking outside the box has already been lucrative for Pathak, who might be considered the elder statesman of the Fellows because of the success of his company, SynapsePay (featured in the 2014 UofM President's Report).

"We are building the next-generation payment network," he says. "It allows people with an Internet connection to move money without revealing their financial information. Our company makes it easier and cheaper for people and companies to store and move money across the world."

To see how SynapsePay works, take a look at what inspired Pathak: "My co-founder Bryan Keltner and I were at a local festival and we couldn't pay with credit or debit cards," he says. "We learned it was too expensive (for the vendors) to process transactions because of associated fees, so they weren't accepting credit cards."

Pathak and Keltner thus created SynapsePay, which costs the seller only about 25 cents per transaction. Pathak says that means huge savings for businesses that accept credit and debit cards. The company has already attracted several major investors and is in use at dozens of local restaurants. 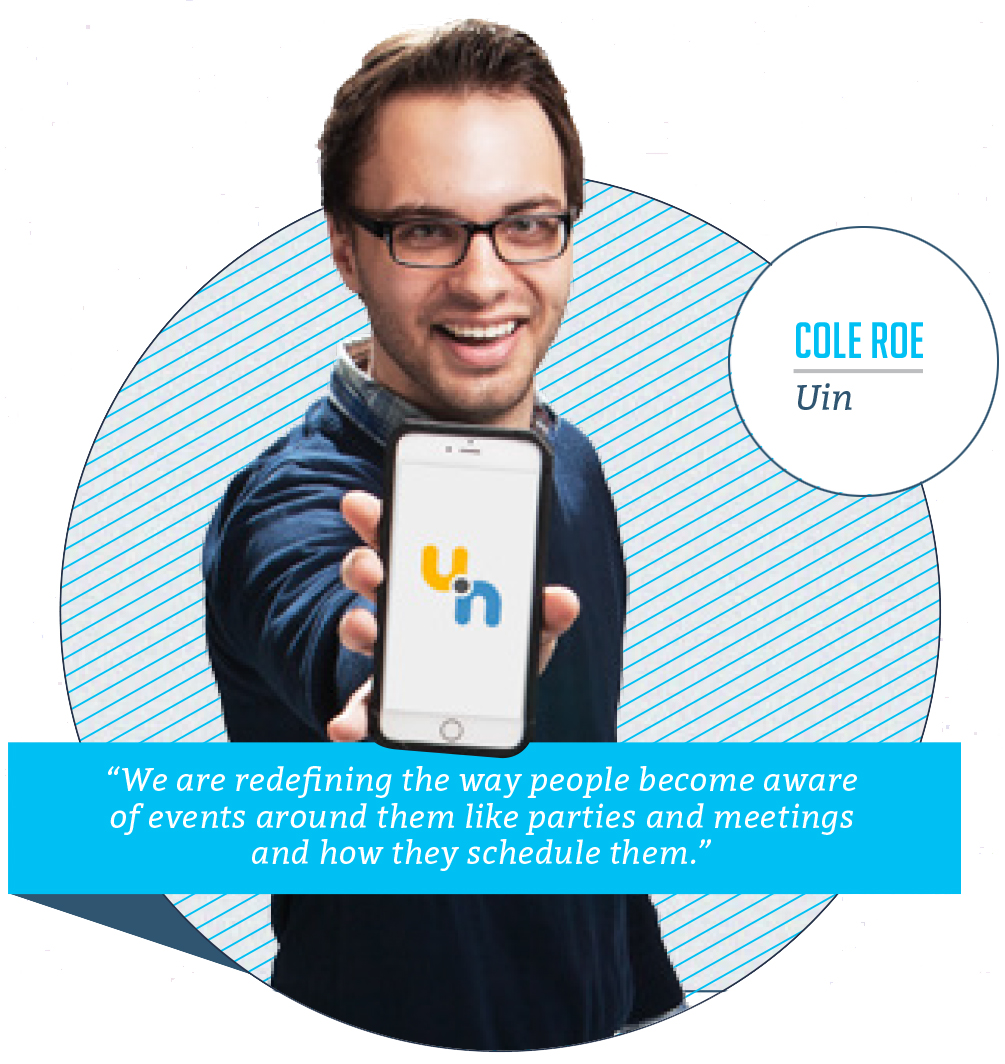 Don't get junior political science major Cole Roe of Munford, Tenn., wrong: he is a big fan of social media — he just thinks a tweak here and there can have huge benefits.

"I've always thought that social media networks and group messaging apps have been incredibly useful, but have equated to just more clutter and extra noise when it comes to being aware of the actual important things happening around us," he says. "Because of that, I started creating a social media service that would filter out irrelevant content and show only what was interesting to each individual. Through that previous venture, I stumbled upon this very niche communication issue of event distribution and social scheduling and decided that it was a prevalent problem among countless people — and a problem I knew how to fix."

Roe created the app Uin (pronounced "you in"). "We are redefining the way people become aware of events around them, like parties and meetings, and how they schedule them," he says.

Uin gives event organizers a singular platform that does all the scheduling legwork for them while providing individuals with a central hub to find out about events of interest to them and an easy way to add these events to their personal calendars.

Roe says the Crews Center has been invaluable. "The 80-plus hours a week we all choose to spend working
on our companies instead of out partying will be worth it, either from the companies we build, the experiences we gain or a combination of both. We are being molded into potent leaders and thoughtful builders."