A research team made up of two UofM professors and students in the Departments of Mechanical Engineering and Physics are paving the way for space exploration to Mars and beyond.

The next generation of manned space missions — such as a journey to Mars — will require new technologies to manage fluids in low gravity. Three University of Memphis mechanical engineering students, along with Drs. Jeffrey Marchetta and Firouzeh Sabri, are conducting research that will pave the way for space exploration to faraway places. 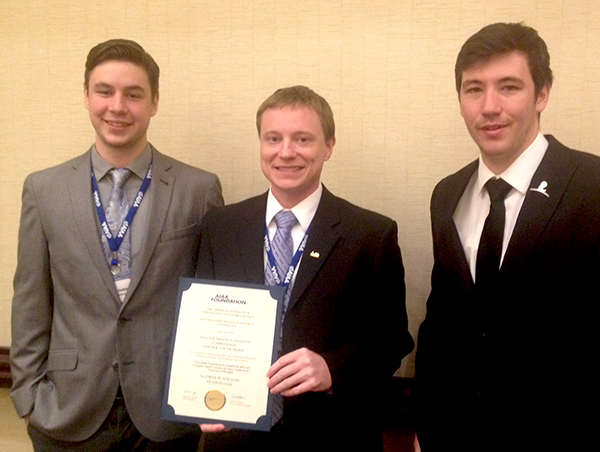 The three students, William Parker, David Pumroy and Douglas Williams, recently won first place in the Team Division of the American Institute of Aeronautics and Astronautics (AIAA) Region II Student Conference for a paper they wrote on the research: "A Feasibility Experiment of a Small Scale RTV-655 Cryogenic Liquid Container for Space Applications."

"Most people would not associate the University of Memphis with space-related research, so this type of recognition is important because it emphasizes that the University is actively involved in research aimed at advancing space exploration and has high-quality students contributing to this effort," says Marchetta, associate professor of mechanical engineering and undergraduate adviser.

The students working on the project are having the opportunity to visit the NASA test centers and work with NASA personnel.

Marchetta and Sabri, associate professor of physics and materials science, say that in space, fluids "behave in strange and unfamiliar ways."

Marchetta says, for instance, "When a person fills up a cup with water on Earth, the water settles to the bottom of the cup because of gravity. If that same cup of water is placed in low gravity, then the water might end up anywhere in the cup.

"Fluids are important for life support, plumbing, rockets and many other systems, which are vital for humans who will live and work in space for long periods of time. Engineers and scientists continue to try to understand this behavior and think of new ways to manage fluids in space."

With support from NASA and the Tennessee Space Grant Consortium, current research activities in the UofM's Department of Mechanical Engineering are focusing on handling very low temperature (cryogenic) liquids such as liquid oxygen and liquid hydrogen, in low gravity. Liquid hydrogen is an essential fuel, called a propellant, for rockets. The rockets that will transport humans from the Earth to Mars will require enormous fuel tanks. This liquid fuel must be contained at low temperatures for long periods of time in the harsh environments found in space and on other planets.

"The temperatures of objects in space and on planets can be as cold as -250 Fahrenheit or as hot as +250 Fahrenheit," says Marchetta. "In the Department of Mechanical Engineering, we are developing and testing new technologies to manage and store these low-temperature fuels in low gravity so that humans will one day be able to travel to and establish colonies on the moon, Mars and beyond."

The researchers are investigating the potential of polymer-based liquid cryogenic containers that could be used for long-term space missions to distant destinations.

The UofM team is collaborating with other scientists and engineers from the Marshall Space Flight Center, the Kennedy Space Center and NASA Glenn Space Center to test prototypes of models developed on the University's campus.

For Parker, a UofM Honors student, he has been able to immerse himself in two areas of the research. "I have been doing work on the experimental and the computational parts of the project," he says. "Last summer and fall, I was focused on the experimental part of the work where we constructed and tested a prototype tank to prove the feasibility of the concept.

"Currently, I am focused on developing a computational model of the prototype tank that we have already constructed to better our understanding of its mechanical behavior.

"I think that I have been enjoying the computational work a little bit more because of how challenging it has been. Definitely the most enjoyable part of the project was when our whole research group got to present our research at the American Institute of Aeronautics and Astronautics Region II Student Conference in April. It was a lot of fun to see what other engineering students were working on and to be able to tell others about the work we have been doing. Also, we took home first place in our category, which was very satisfying to say the least."

The research paper that Parker, Pumroy and Williams won the award for beat teams from 14 campuses throughout the Southeast, including the University of Tennessee, Vanderbilt University, Georgia Tech, University of Florida and University of Alabama. The UofM team was awarded cash prizes and advance to the AIAA Foundation International Student Conference, which will be held in San Diego next January.

Physics graduate student Andrew Brock has also been a member of the UofM's research team.