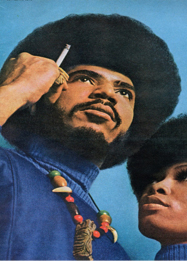 The exhibition Lawrence Matthews III: The Marketing of Perception features Matthews' recent work exploring issues of race, image, and appropriation. Derived from cigarette and alcohol advertisements in issues of Ebony magazine from the 1960s and '70s, the artist's vibrant photographs of African-American men and women, featured out of their original context, provoke questions of image making on both literal and figurative levels. Stemming from Matthews' recent foray into photography, the exhibition also includes the artist's trademark video installations comprised of analog televisions playing commercials from the period.

On his subject matter, Matthews recalls, "In college, I began to collect copies of Ebony from the 1960s and 70s. I was amazed by the progressiveness of the articles, as well as the beautiful photography in the ads. They portrayed Black people as intelligent and successful members of society. However, I began to notice nearly all of these ads where for liquor and cigarettes. Brands I'd known as stereotypically "Black" such as Newport, Seagrams, Hennessy, and Salem were repeated throughout the pages. I started to wonder why products known to be harmful were featured so prominently in a magazine existing to uplift Black Americans."

Matthews' close zoom brings to the forefront products once subtly placed in everyday scenes while his deliberate cropping removes the ad copy that once surrounded these images. His photographs take on new meaning as standalone images of cool, sexy, powerful, and respectable individuals, yet under their veneer, also allude to a contentious, racialized history of corporate power and blighted communities.

Lawrence Matthews III was born in Memphis, Tennessee, in 1991. His work ranges from painting, collage, photography, and ready-made sculpture, to music and film. In 2014, Matthews received his Bachelor of Fine Arts degree from the University of Memphis. His work has been included in multiple solo and group exhibitions around the mid-south including Caritas Village, Circuitous Succession Gallery, David Lusk Gallery, and Crosstown Arts, among others. He has received numerous grants and awards including Best of Show at The University of Memphis' 31st Annual Juried Student Exhibition in 2014, the Dean's Creative Achievement Award and Department of Art Creative Achievement Award in 2015.