Architectural Design of the Hall

Sety I’s architects designed the Hypostyle Hall to fill an open space that lay between two pylon gateways that had each, in their time, served as the front entrance to Karnak Temple. Pharaoh Amenhotep III (ruled ca. 1346-1349 BCE) built what we call the Third Pylon, and two generations later, the Eighteenth Dynasty's last king, Horemheb (ruled ca. 1321-1293 BCE) built his Second Pylon further to the west, which became the new main entrance to Karnak. 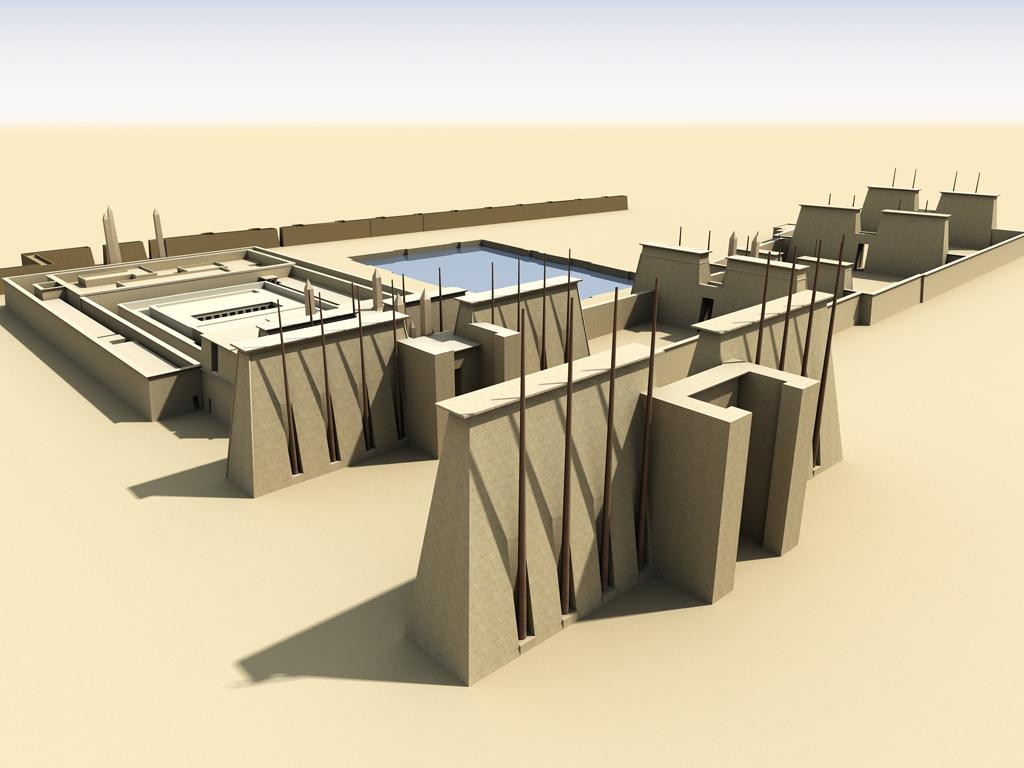 The First, Second, and Third Pylons are not ancient names, but ones Egyptologists gave them based on the order in which they appear as visitors move from the outside of Karnak eastward towards the holy of holies along the main east-west axis of the temple. There are six pylons along the east-west axis, with the First Pylon being the newest and the Fourth through Sixth Pylons being the oldest. On a counter axis extending southward from the center of Karnak lie four great open courts, each fronted by a massive pylon gateway, the Seventh through Tenth Pylons. 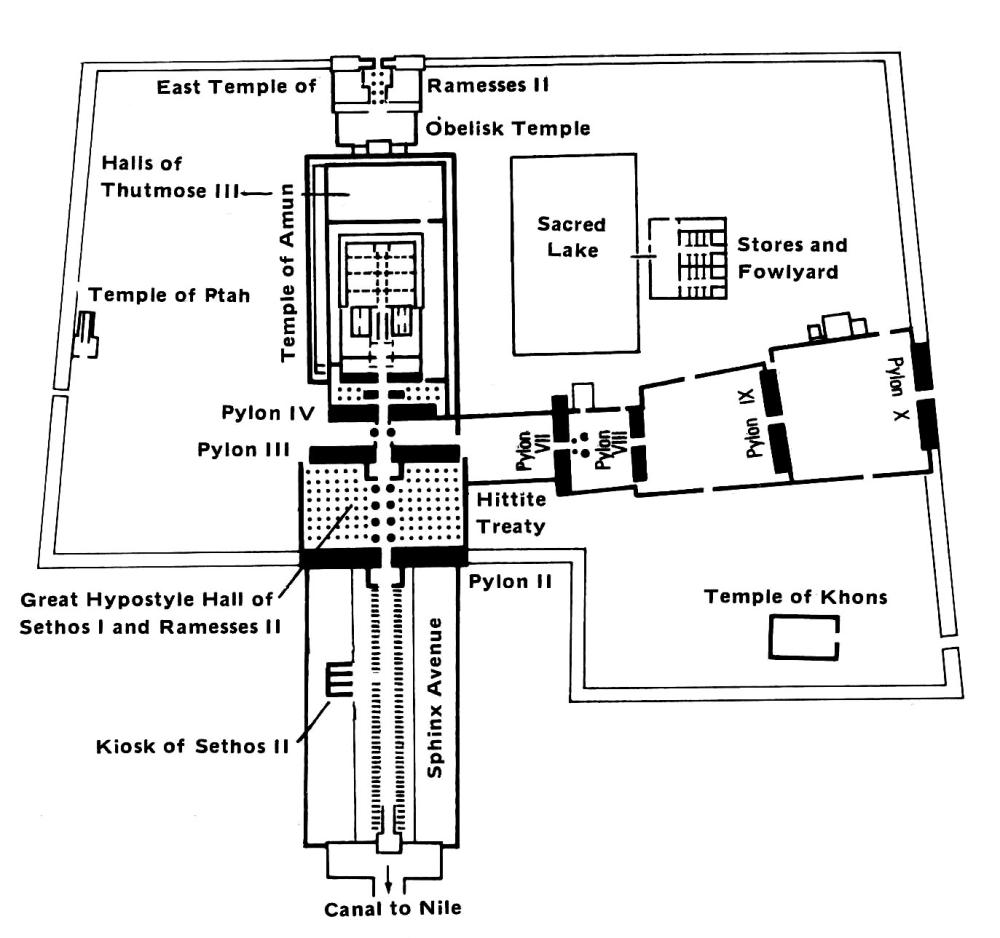 Plan of the Karnak Temple Complex during the 19th Dynasty.

Rather than build yet another grand entrance in front of the Second Pylon, the kings of the early Nineteenth Dynasty decided to fill the open space between Horemheb’s Second Pylon and Amenhotep III’s older Third Pylon with a grand hypostyle hall. Although this project may have begun during the brief two year reign of Ramesses I (ruled ca. 1293-1291 BCE), the Great Hypostyle Hall is essentially the work of his son Sety I, who erected cross-walls to connect the outer wings of the two pylons and filled the enclosure with no less than 134 columns supporting a high roof. 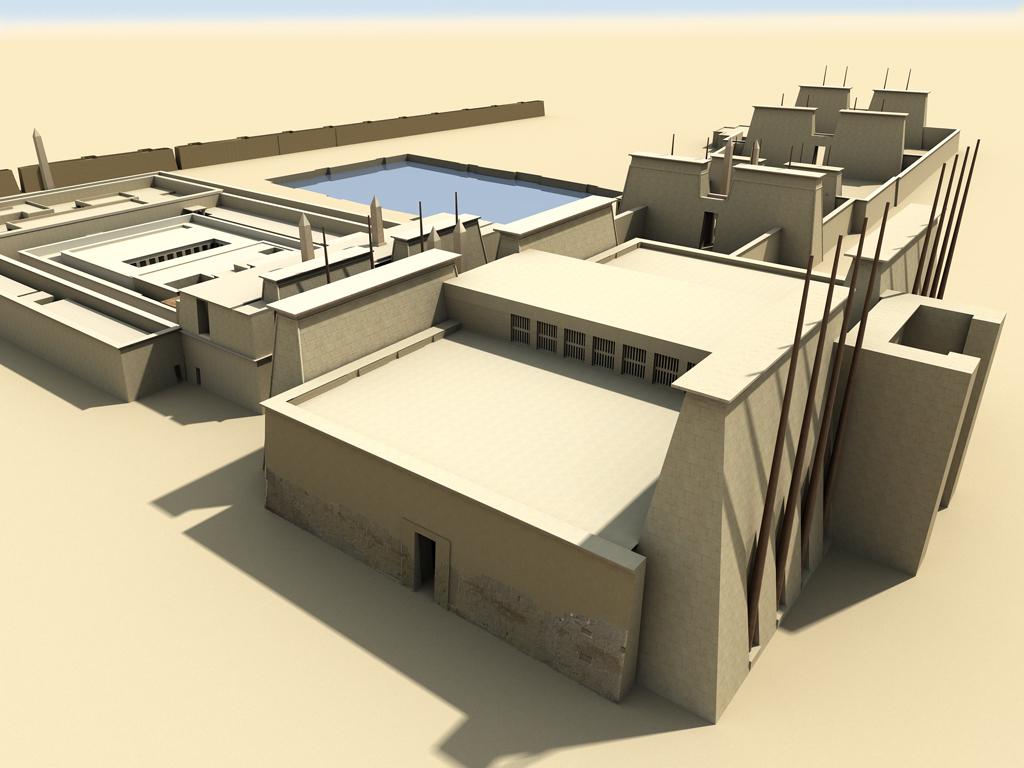 Model reconstruction of the Hypostyle Hall built between the Second
and the Third Pylon. © UCLA Digital Karnak. 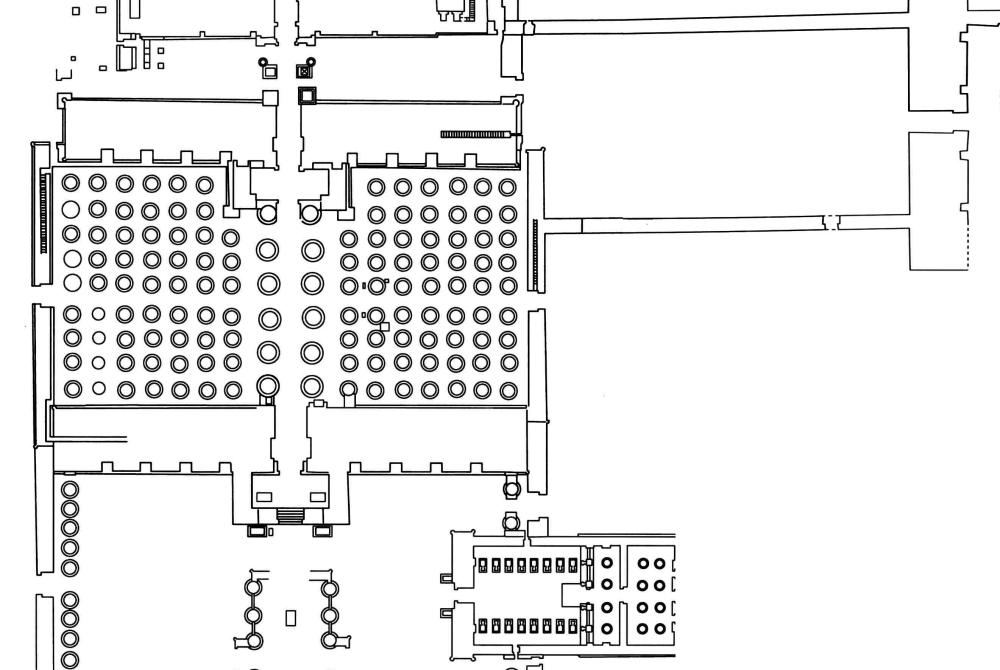 Plan of the Hypostyle Hall.

Two rows of columns, twelve in all, line the central nave that leads into the temple, back toward the main sanctuary of Amun-Re. These reach heights of 20 meters (65.6 feet) and have wide, bell-shaped capitals representing papyrus stalks in bloom. To either side of these, two adjoining rows of smaller columns uphold the clerestory roof with its gigantic stone window grilles which let in light. One hundred and twenty-two of these shorter columns, each measuring 14 meters (45.9 feet), supported the lower roof for the remainder of the Hall’s northern and southern wings beyond the nave.

View of the larger columns with architraves still in situ and the remains of a clerestory window
in the background (left) and smaller columns (right).

The architects laid out these closed-bud papyrus columns in evenly spaced rows, broken only by a central counter-axis running from north to south and bisecting the main processional route running from east to west through the central nave of the Hall.  Doorways in the center of the north and south walls opened onto pathways which led, respectively, to smaller “guest temples” dedicated to the gods Ptah and Monthu (north) and Khonsu (south) to either side of the main temple of Amun-Re. 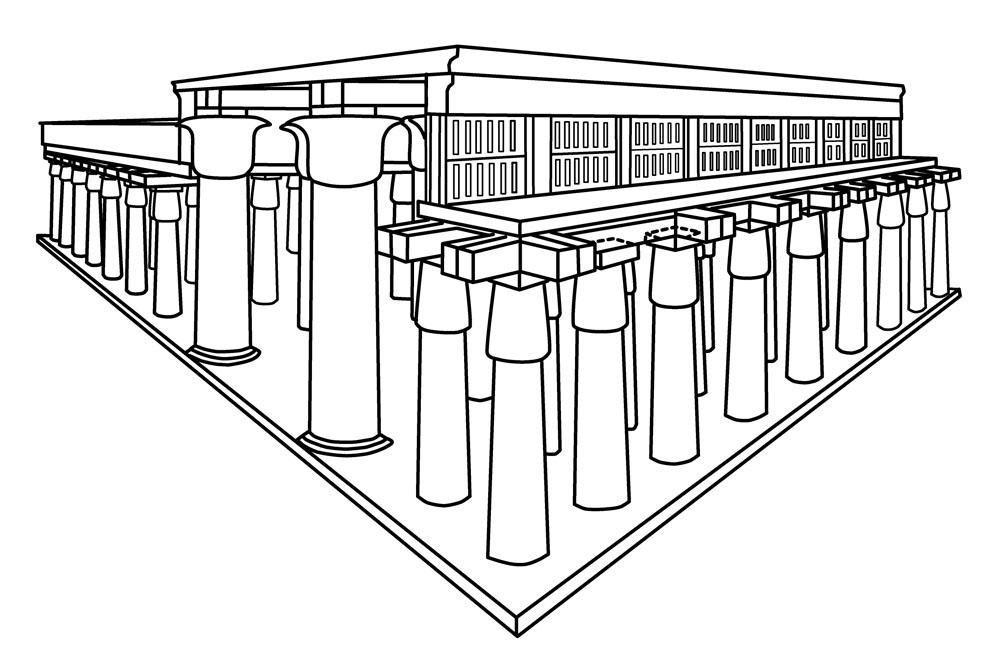 Diagram of the Hypostyle Hall with its main east-west axis lines by twelve large columns, with the smaller columns to their either side holding up the clerestory windows and the rest of the roof of the Hall.

All of these columns upheld a roof consisting of networks of massive stone beams called architraves. Four sets of architraves run east-west through the central nave, while those on the lower parts of the roof align north-south. Many of those in the north wing have now collapsed and were replaced in the early 20th Century with hollow metal and concrete facsimiles. Those in the central and south naves survive largely intact. Giant pieces of these architraves are scattered about the Karnak complex, including one resting inside the First Court which visitors to the temple can inspect next to the remains of a mud brick ramp used in the construction of the First Pylon’s south tower. 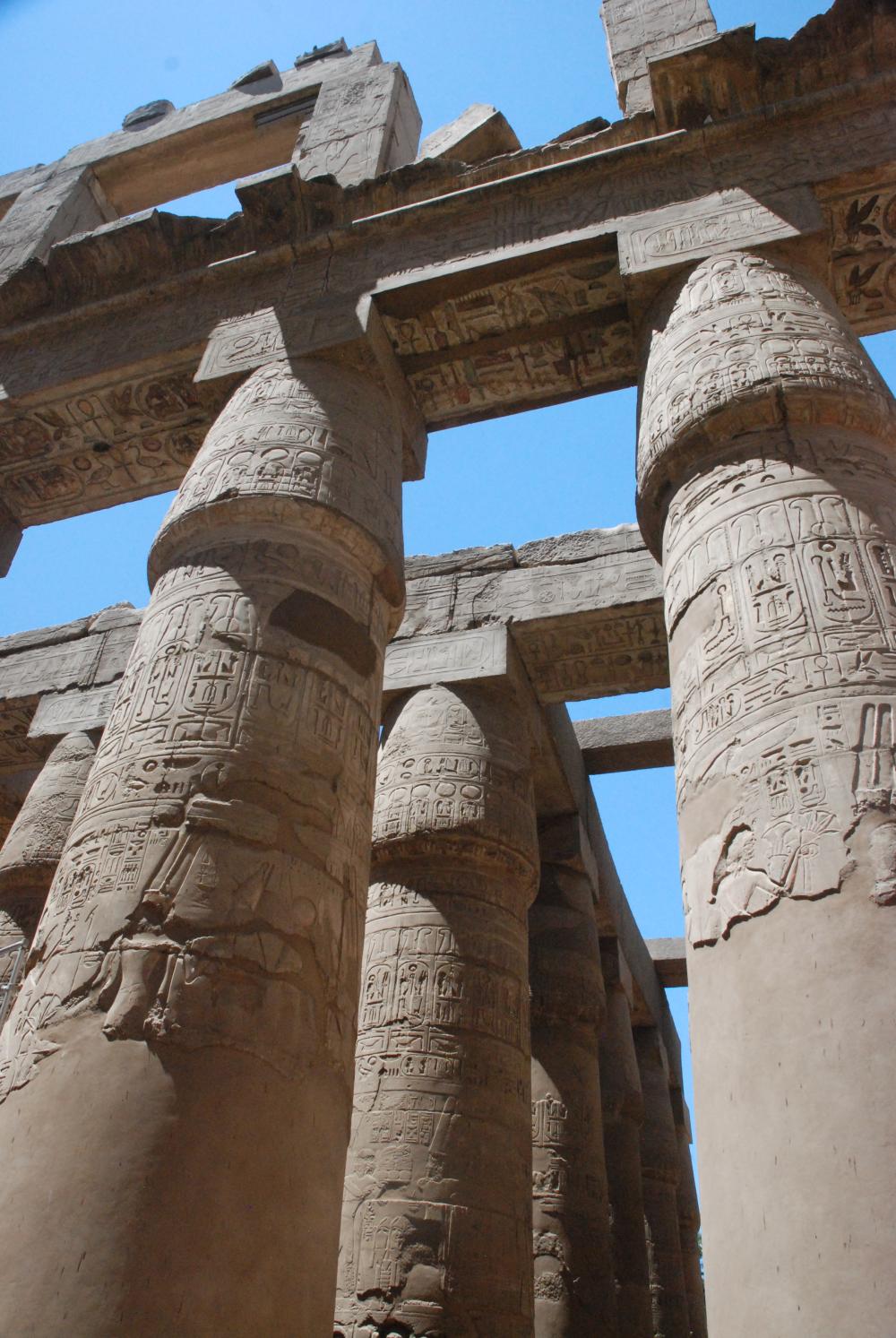 View of architraves on top of smaller columns still in situ.

The architraves’ purpose was to allow dozens of ceiling slabs to rest upon them. Except for a pair of small slots carved in some of them to admit narrow shafts of light, the only ambient illumination in the Hypostyle Hall came via the massive window grilles of the clerestory. All but a couple of these ceiling slabs have collapsed so that today the Hypostye Hall is flooded with sunlight. In antiquity, however, the ceiling would have cloaked it in a spooky twilight even at the height of day. 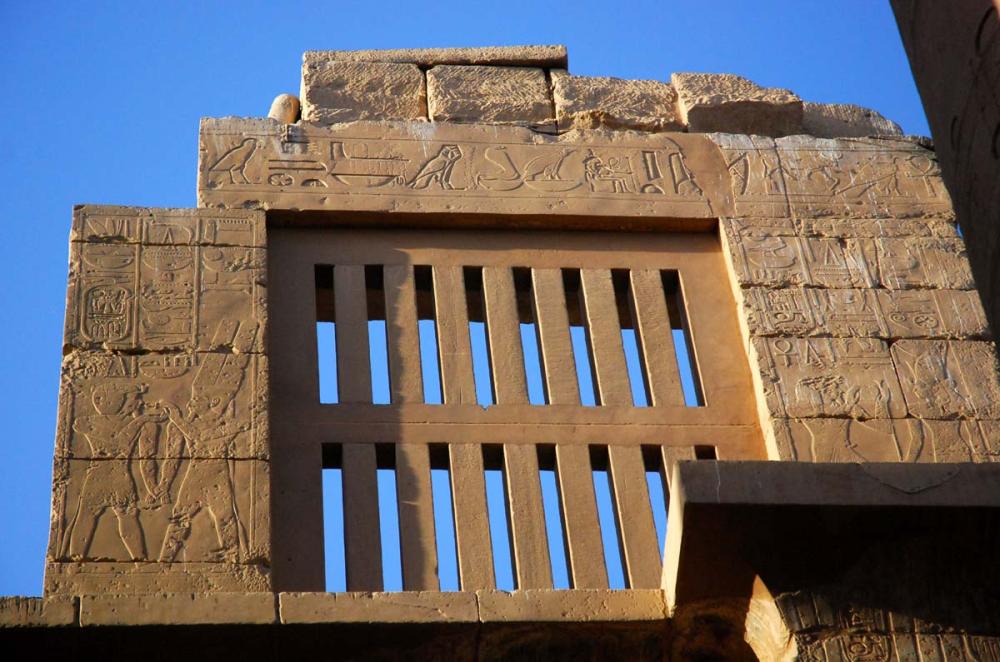 View of a clerestory window. 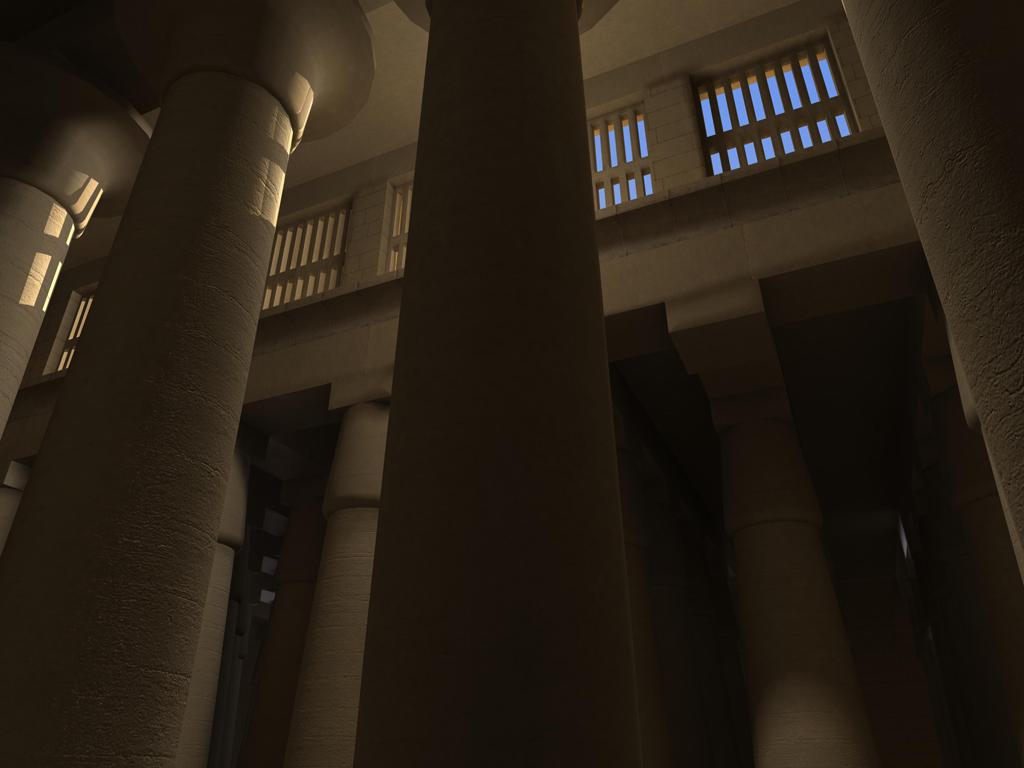 Reconstructed model of the way the clerestory windows would have provided lighting for the Hall. © UCLA Digital Karnak.

The completed structure, with its 134 columns enclosed by the towers of the Second and Third Pylon to its west and east and by side walls on its north and south, covers nearly an acre and exceeds by far the dimensions of any similar columned hall in any other Egyptian temple, earlier or later. Within this space could rest almost all of Paris’ Notre Dame cathedral.