Skip to main content
X
About Us
Take Action
Follow Us Online
InstagramtwitterLinkedIn
Home Students About Us Dr. Karen Weddle-West 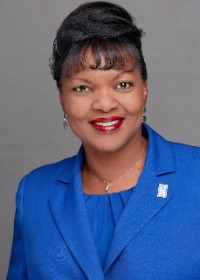 Karen Weddle-West serves as the Vice President of Student Academic Success. In this role, she conducts administrative and programmatic oversight and coordination with the Assistant Vice President of Student Academic Success and Dean of Students. She was appointed the University’s director of Diversity Initiatives in 2012.  As diversity director, she has been the conduit for programs, services, funds and resources designed to promote, sustain and enhance campus diversity in higher education. In collaboration with a broad-based committee, she serves as the liaison between campus and community diversity initiatives designed to contribute to successful academic experiences for all students. Dr. Weddle-West has garnered a distinguished record of scholarships nationally and internationally in invited presentations, publications, and professional service focused on graduate education, graduate student research and diversity. Notable accomplishments during her service as Vice Provost for Graduate Programs/Dean of the Graduate School and faculty member in Educational Psychology and Research include the oversight and launching of 60 new graduate programs and chairing and serving on more than 100 dissertation committees.  Additional honors she received include a nomination by the President to participate in The ACE Millennium Leadership Initiative, the Dr. Martin Luther King Jr. Human Rights Award at the University of Memphis, the 2014 Education Honoree of the University’s NAACP Freedom Ball and Mahogany Awards, the Earl Crader Award and the Igniting Excitement Award for Academic Excellence. She was awarded the M.S. and Ph.D. degrees in 1977 and 1982 respectively from The University of Tennessee. Dr. Weddle-West has served 33 years as a college professor and 24 years as an administrator in higher education. Throughout her career, she has put students and their needs first in everything she does.  Her depth and breadth of knowledge, expertise and understanding of our academic programs across campus is unparalleled.