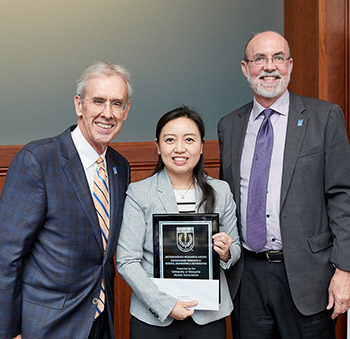 Dr. Wang joined the Department in Fall 2004 after finishing her PhD at UCLA. She was promoted to Associate Professor in 2010 and to Full Professor in 2016. Her research focuses on improving the scalability, reliability, and security of the Internet. She has received three major research grants from NSF and several grants from the university. Most recently, she is on a team that received a $7.9 million grant from the NSF Future Internet Architecture program for their "Named Data Networking" project.

At the University of Memphis, Dr. Wang has taught a variety of courses including Networking and Information Assurance, Advanced Computer Networks, Wireless and Mobile Computing, Models of Computation, Web Services and the Internet, and Data Structures.

As an active member of the research community, she has served as the Co-Chair of the 4th Workshop on Secure Network Protocols and a program committee member of 27 conferences and workshops. She is also interested in promoting female participation in computer science, co-organizing a "Networking Networking Women" panel at ACM SIGCOMM 2008.

Dr. Wang is an IEEE Senior Member. She received the 2010 Early Career Research Award from the College of Arts and Sciences at the University of Memphis.