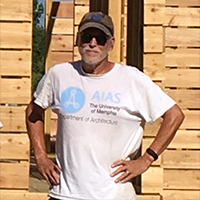 Michael Hagge is a Professor and Chair of the Department of Architecture.

Michael teaches the summer AIAS Design+Build Studio as well as Introduction to Architecture + Design, Design Studio 2, and other courses at the graduate and undergraduate level.  Although no longer in active professional practice, Michael brings over 30 years of experience into the studio and classroom.  Much of his work in architecture, urban design, and city planning has focused on quality of life issues for disenfranchised populations and "giving back" to the community, a belief that is part of the core values of the Department of Architecture.

Michael holds two professional degrees:  a Master of Architecture from Virginia Tech and a Master of City + Regional Planning from the University of Memphis.  Michael considers himself fortunate to have also studied under the late Swiss architect Olivio Ferrari in Ticino, CH.  Michael also earned a Master of Arts in Public Administration under a Government Service Fellowship from the US Civil Service Commission.

Among the many awards Michael has received over his career, he is most proud of the Francis Gassner Award from AIA Memphis (co-recipient with Professor Sherry Bryan), the Tau Sigma Delta Silver Medal from the TSD Kappa Alpha Chapter, the UofM Excellence in Engaged Scholarship Award, and the United Nations International Year of Shelter Award for his work in fair and affordable housing.