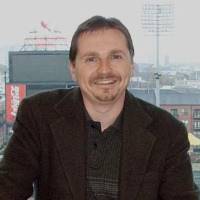 Andy L. Kitsinger is first and foremost a community builder. His thirty-year career as an architect, urban designer, city planner and teacher has focused on creating authentic places that are strongly influenced by their context and have a positive impact on their community.

As the director of architecture for Basco Associates, Kitsinger focused on improving school districts throughout Pennsylvania and was named to the Business Journal's Top 40 Under 40 program.

He returned to Memphis in 1997, joining LRK Architects. His project manager roles on AutoZone Park and the FedExForum helped to revitalize two previously blighted areas of Downtown, while creating award winning urban places. In a partnership with the Memphis Housing Authority and the UPTOWN partnership, Kitsinger helped create the Uptown Neighborhood Redevelopment Plan and currently served on the Uptown West Development Committee.

Kitsinger chaired and served six years on the Memphis Historic Landmarks Commission and is a long-term member of the National Trust for Historic Preservation. He is the founding Chairman of the Board of Directors of the Memphis Farmers Market. He is also a Past-President of AIA Memphis and AIA Central Pennsylvania. Teaching has always been important to Kitsinger. He teaches and services as the Director at the University of Memphis Design Collaborative in the Departments of Architecture and City & Regional Planning.

He currently serves on the board of the Midtown Development Corporation (CDC) as well as active in the Urban Land Institute. He helped form and served on the Board of the Memphis Regional Design Center as well as serving on the Memphis Metropolitan Planning Organization (MPO), Transportation Committee.

Kitsinger served as the Sr. Vice President of Planning & Development for the Downtown Memphis Commission (DMC) for the last eight years where he continued the momentum of downtown planning and development while working to improve the livability and the quality of life in the city. He continues those same objectives in multiple cities today in his new role as principal of The Development Studio, a firm focused on helping clients implement their vision more effectively.