At every annual University of Memphis Language Fair, a MidSouth world language teacher of courses earning high school credit is recognized as the University of Memphis Language Fair Teacher of the Year. This year's award of a $500 travel voucher is sponsored by EF Educational Tours.  For more information about EF Tours or the travel voucher award, contact our regional Educational Tour Consultant, Malia Rummell (malia.rummell@ef.com).

ELIGIBILITY FOR TEACHER OF THE YEAR

NEW:  Nominees must have had registered students in the UofM Language Fair within the past two years.

Nominations are encouraged for past candidates who did not win the award.  Once a teacher wins the UofM Language Fair Teacher of the Year Award, they are no longer eligible to be nominated again.

The nomination letter and at least one letter of recommendation MUST be emailed from an official school email address to flfair@memphis.edu with "Teacher of the Year" in the Subject Line by no later than February 28, 2023.

We look forward to seeing you on Saturday, March 25, 2023, at the UofM Language Fair on the main campus of the University of Memphis! 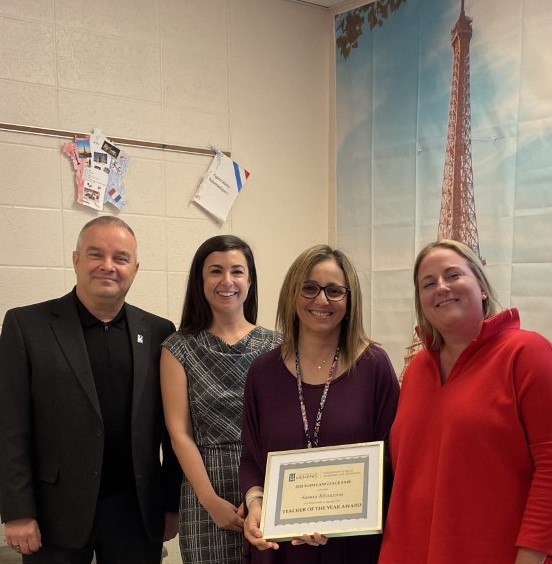 Last year's recipient of the UofM Language Fair Teacher of the Year award was Samia Khouzam. In recognition of her contributions to world language education, she received a $500 travel voucher from EF Education First. The full press release can be viewed here. Congratulations, Mrs. Khouzam!

Pictured from left to right:

Follow us on social media to keep up with the latest news about the Fair. You can look for us on Instagram, Facebook, and Twitter by searching for the username @UofMLangFair or clicking on the icons below.