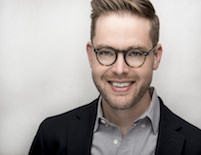 Jacob joined the BFA Performance faculty in 2010 with an emphasis in Musical Theatre. As a director and performer Jacob has worked extensively throughout the Midwest and New England.  Productions include My Fair Lady, Guys and Dolls, The King and I, Fiddler on the Roof, Les Mamelles de Tiresias, El Capitan, Helen of Troy, Little Shop of Horrors, The Last Five Years, You're A Good Man Charlie Brown, La Traviata, The Consul, Ruddigore, Naughty Marietta, Merrily We Roll Along, Anything Goes, Jekyll and Hyde, Kiss Me, Kate, Children of Eden, and The Winter's Tale.  As an artist Jacob is an advocate for American Lyric Theatre and Art Song. He has recently performed in the premiere of Lee Hoiby's This is the Rill Speaking and directed the first staged production of Jake Heggie's For a Look or a Touch.  In 2003 he premiered David Thurmaier's cycle of songs for Baritone, Three American Songs based on texts by Walt Whitman, Robert Frost, and Edward Arlington Robinson. He has also been featured in many recordings of early American musical theatre and operetta in English translation on the Albany Records label, and DVD's of his work as both performer and director are available through the American Operetta Foundation.  As a teacher Jacob is fascinated by the challenges faced by young singers in their development as theatrical performers and is dedicated to the integration of acting and singing. He was the 2014 recipient of the Thomas W. Briggs Foundation award for excellence in teaching, the University of Memphis' highest honor for excellence in the classroom.