As part of an ongoing research effort, AMUM is searching for original works of art by Samuel Hester Crone.

Samuel Crone was born on May 2nd, 1858 in Columbia Tennessee. Shortly after, his family moved to Memphis. At the age of 17 he left Memphis to study at the Royal Academy of Fine Arts in Munich, Germany. He spent nearly four decades moving around Europe, where he developed a level of skill comparable to the most prolific and well-known artists of his time. At the age of 55, he decided to return to the United States – but contracted pneumonia and died only a few short days after his arrival. Though he was always able to make a living as an artist, he never received much attention during his lifetime, or afterwards. To this day, his work is a mystery to all but a handful of scholars and collectors.

AMUM is currently in the process of developing an in-depth online resource that catalogs known works and records vital information. We hope to help transform Crone's "big story" into legacy by bringing this information to the public. Please contact Leslie Luebbers if you know of any paintings, drawings, or related material by this 19th century American artist.

From Home to Memphis, by Elizabeth Jane Walk |The University of Memphis Magazine, Winter 2001

"The circuitous trip of Crone's artwork from Europe to Memphis is a fascinating story involving academic curiosity, tenacity and good fortune. When architect William Huff was a young man, his mother presented him with about 200 sketches wrought by his great uncle through marriage, Samuel Crone. "She said, 'Well you're the artistic one in the family so you should have these," recalls Huff, who at the time was being indoctrinated into modern art in his pursuit of architectural studies. "I sort of thanked her and put them in the back of my closet and didn't do much with them. They just stayed there for a decade or so." 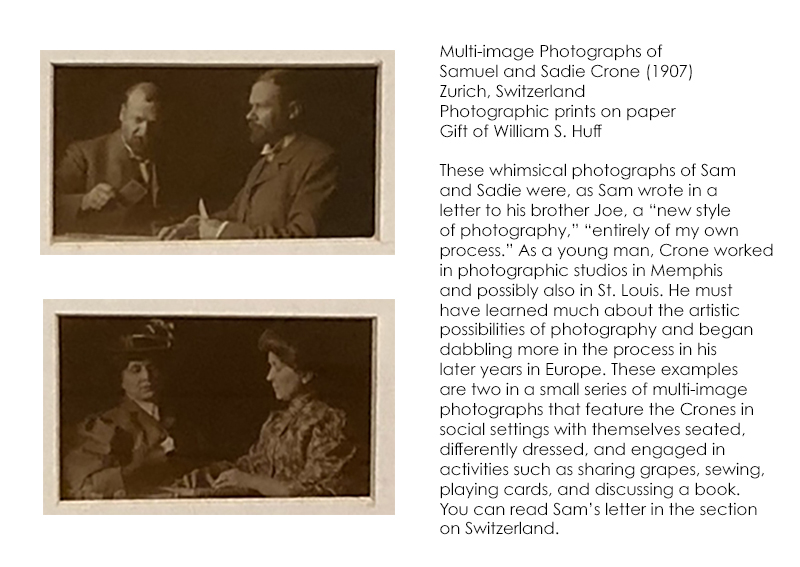 Later, Huff worked for the legendary Philadelphia architect Louis Kahn, who was a gifted artist. "Kahn was quite a master at making wonderful sketches," says Huff. Kahn's influence convinced Huff that the sketches languishing in the closet were worthy of serious attention. With his curiosity piqued, Huff eventually took the sketches to Carnegie Institute's Museum of Art for a second opinion. Impressed by the sketches, the curator proposed mounting a Crone exhibit. Then he posed a simple question to Huff: "What do you know about Crone?"

Huff suddenly realized that his knowledge of his great uncle was restricted to a few family anecdotes, an incomplete genealogical entry, a handful of photographs and the portfolio of sketches.

Huff's adventure took him to a country cemetery in Pennsylvania, across Europe and finally to Memphis, Tennessee and the Art Museum of the University of Memphis. AMUM has organized four exhibitions of Samuel H. Crone's work: A Return to Memphis: The Art of Samuel Hester Crone, 1997; Samuel H. Crone: The Working Process of a 19th Century Painter, 2001; Samuel H. Crone: Answers and Questions, 2005; and Sketching Europe: A Tour Through the Eyes of Memphian Samuel H. Crone. "Thus began an itinerary whose course was hazy, but objective clear: to bring to Samuel Hester Crone a measure of recognition in the annals of American art," writes Huff in an article about his family member. "Suddenly, the lack of a substantial record of the artist's background, its revelatory context of place and time, was threatening my hope for Uncle (Great Uncle, to me) Sam's overdue recognition. I soon turned that distress, however, into the adventure of an open-ended search."

Huff decided to bequeath his large collection to the University of Memphis, along with an endowment that will be used for preservation and study. Leslie Luebbers, Art Museum Director, says the works will complement the Art Museum's permanent collection. "The drawings are absolutely wonderful," says Luebbers. "Even the quickest little line sketches are pretty glorious. The paintings range from finished paintings to oil sketches," she continues. "And they range in style form his earliest kind of academic paintings, which are in the style of late Baroque painting, up to abstract expressionist landscapes. In particular, a series of the eruption of Mount Vesuvius in 1906 are spectacularly expressionistic."

Contact AMUM to purchase a copy of "A Return to Memphis: The Art of Samuel Hester Crone (1858-1913)," with an introduction by Art Museum Director, Leslie Luebbers, and essays by Henry Adams, Professor of American Art at Case Western Reserve University, and William S. Huff, Professor of Architecture at State University of New York at Buffalo.

You can learn about the pieces he was involved right here.