Survey Two: The Boundaries of Normal 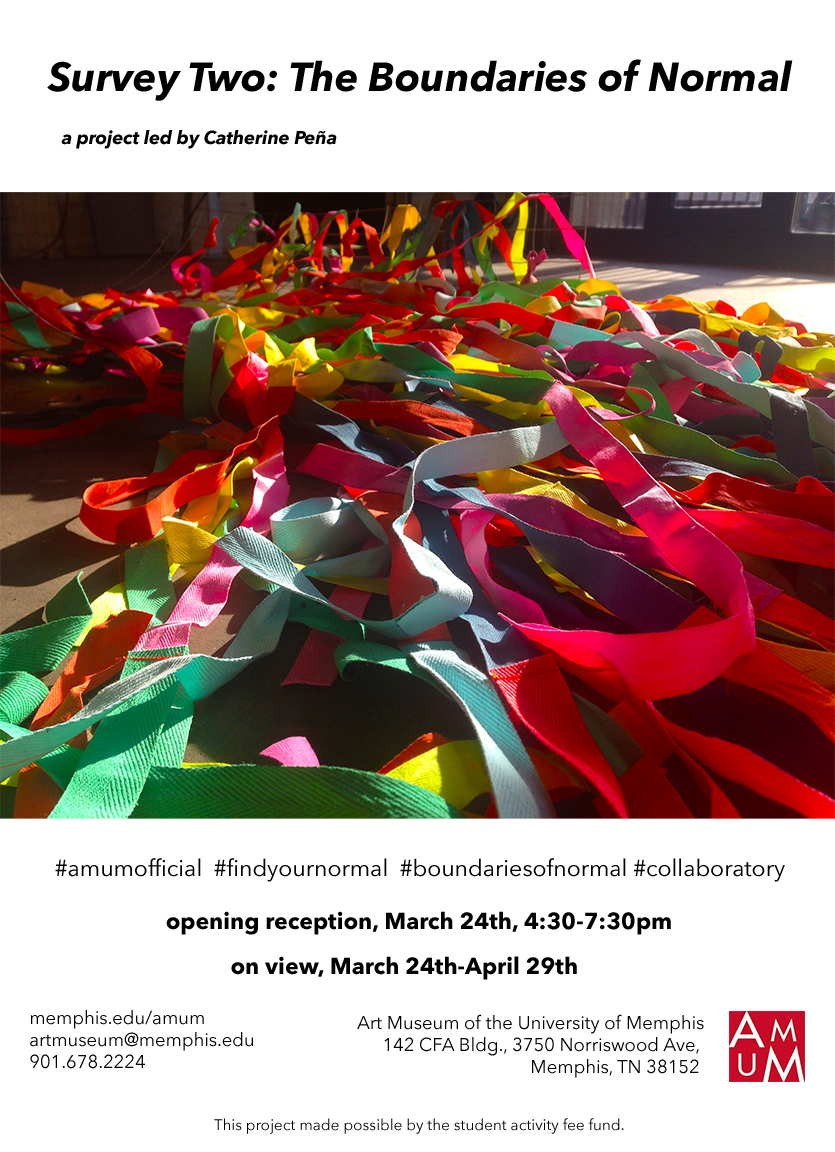 In 2015 Collabortory initiated Survey 1: the EDGE District in which eight local artists conducted a 5 month artist run, intensive investigation of the Edge District, an often-overlooked quadrant between Midtown and Downtown Memphis Tennessee to create thought provoking and site specific artwork that will add aesthetic vibrancy to the neighborhood, draw people to the area, and connect a historically rich neighborhood. The Downtown Memphis Commission funded the research phase as well as several projects conceptualized during Survey 1.

In partnership with the Art Museum at the University of Memphis, Collabortory presents Survey 2: The Boundaries of Normal. Envisioned by artist/cultural producer Cat Peña, Collabortory is a creative platform that offers an alternative method to producing public art, focusing on artist led collaborative practices.

Survey 2: The Boundaries of Normal was broken into three phases:

For the past five months students/faculty of the University of Memphis, sixteen local artists/makers and residents of the neighborhood have collaboratively explored and researched the Normal Station neighborhood, due south of the main University of Memphis campus. From our informed research a series of thought-provoking and site-specific public art experiments were produced and temporarily installed in the neighborhood. These works were symbols of the neighborhood's historic, economic, and cultural development and their intention was to add aesthetic vibrance and an enhanced "sense of place".

Research results, documentation, and artifacts from each experimental public art project produced during ArtLABS will be installed at the Art Museum at the University of Memphis from March 24th – April 29th 2017.

In addition, museum visitors are invited to interact with several participatory projects that were part of Survey 2:

ArtLAB1: Define your Normal is a string installation that offers a place for people connected to the neighborhood of Normal Station to contribute personal objects (i.e. photos, hand written stories/memories and small objects) to create an interactive timeline of the neighborhood.

Each of Survey 2's ArtLABs participated in a performance called "Recalculating Route" which was lead by New York based artist Ofri Cnaani as a way to explore Normal Station.*

During this exhibition, we will install an annotated map that includes images taken during the Normal Station's Recalculating Route performances and encourage viewers connect and comment on our findings.

*Recalculating Route has been presented at the Israel Museum in Jerusalem, Inhotim Institute, Brazil and in the streets of New York City.