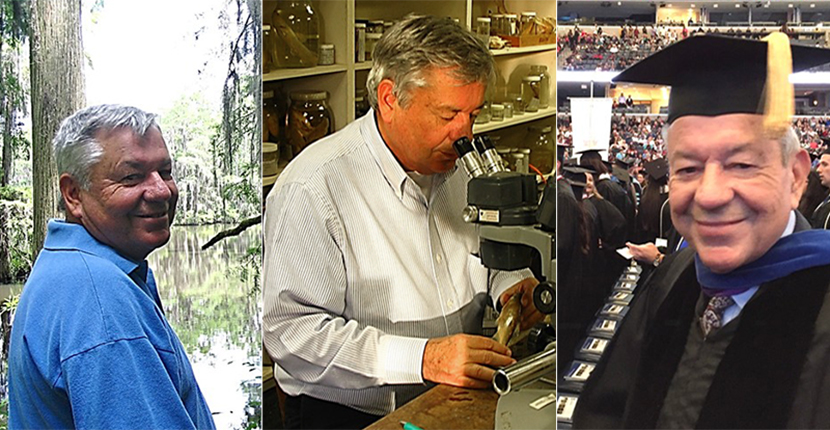 The Department of Biological Sciences lost a family member this weekend. Dr. Bill Simco was an excellent teacher, an outstanding scientist, an exceptional mentor, a much respected colleague, and a kind and decent man. Dr. Simco had a 48-year career at the University of Memphis as a professor in the Department of Biological Sciences and co-Director of the Ecological Research Center.

He was the son of Seaph and Jessie France Simco and the brother of Jim Simco of Phoenix, AZ and Patsy Simco and her husband Larry Goodner of Mountainburg, AR. He was husband to Cheryl and father to Billy. He was uncle to Patsy's daughters Jennifer and Melissa and too many Goudie nephews and nieces to list. Bill graduated from Mountainburg High School in 1956, College of the Ozarks in 1960 and the University of Kansas in 1966. He had a 48-year career at the University of Memphis as a professor in the Department of Biological Sciences and co-Director of the Ecological Research Center. Bill will return to Mountainburg, AR to rest alongside his parents.

Bill grew up in a small town playing hose ball on top of a mountain. As an adult, he loved teaching and mentoring students – he said they made him feel perpetually young. He was a friend to so many and a stranger to none, a man of honor, courage, strength, good character and above all, kindness. The impact he had on countless lives can never be fully known. Sometimes we are struck in life with the blessings that we have: those who knew Bill knew that he was special and that they were blessed. Bill's greatest legacy can be seen in his son and when all is said and done, he would say he "done good". But of course, he was too humble to actually say that!

In lieu of flowers, please contribute to the Bill A. Simco Graduate Research Scholarship