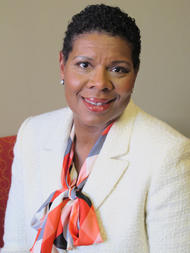 Terri Lee Freeman was appointed president of the National Civil Rights Museum in November 2014. As president, Freeman is responsible for providing strategic leadership in furthering the museum's mission as an educational and cultural institution. Ms. Freeman's goals for the museum include establishing the museum as the new "public square" for dialogue about and around civil and human rights, providing a safe space for people to exchange and learn; becoming an institutional center for the promotion of nonviolence, social justice and equity; and being a "hands on" educational resource for those desiring historical knowledge of civil and human rights.

For 18 years, Ms. Freeman served as president of the Community Foundation for the National Capital Region, the largest funder of nonprofit organizations in the Washington, D.C., metropolitan area. In that position, she distinguished herself for her community building, her role in creating community consensus, her leadership on critical issues to improve quality of life, and her record of increasing the Community Foundation's assets from $52 million to more than $350 million. She has a record of using her skills and experience to bridge differences between diverse people and finding common ground for the future, as reflected in a number of awards and her board leadership and membership with important nonprofit organizations in the nation's capital.

Prior to the Community Foundation, Ms. Freeman was founding executive director of the Freddie Mac Foundation, one of the five largest corporate foundations in the metropolitan Washington region.

A graduate of the 1996 class of Leadership Greater Washington, Ms. Freeman has served on a variety of boards. She's just joined the board of the Community Foundation for Greater Memphis and the Memphis Convention and Visitors Bureau, as well as being a
member of the 2016 class of Leadership Memphis. She is the former chair of Washington Regional Association of Grantmakers; served as board member for Generation Hope and honorary board member of Venture Philanthropy Partners.

Freeman received her bachelor's degree in journalism/communication arts from the University of Dayton and her Master's degree in organizational communications from Howard University. She is married to Dr. Bowyer G. Freeman and is the proud mother of three daughters.