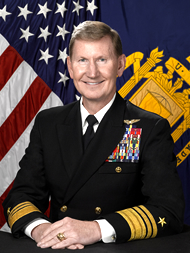 Vice Admiral Walter E. "Ted" Carter Jr became the 62nd superintendent of the U.S. Naval Academy on July 23, 2014. He graduated from the U.S. Naval Academy in 1981, was designated a Naval Flight Officer in 1982, and graduated from the Navy Fighter Weapons School, "Top Gun", in 1985. He completed the Air Command and Staff College course and the Armed Forces Staff College. In 2001, he completed the Navy's Nuclear Power Program.

Admiral Carter's career as an aviator includes extensive time at sea, deploying around the globe in the F-4 Phantom and the F-14 Tomcat. He has landed on 19 different aircraft carriers, to include all 10 of the Nimitz-Class carriers. He commanded the VF-14 "Tophatters," as well as both USS Camden and USS Carl Vinson. His most recent Fleet command assignment was as Commander, Enterprise Carrier Strike Group, during "Big E's" final combat deployment as a 51-year-old aircraft carrier in 2012. Prior to Annapolis, he served as the 54th President of the U.S. Naval War College.

Admiral Carter has flown 125 combat missions in support of joint operations in Bosnia, Kosovo, Kuwait, Iraq and Afghanistan. He accumulated 6,150 flight hours in F-4, F-14, and F-18 aircraft during his career, and safely completed 2,016 carrier-arrested landings, the record among all active and retired U.S. Naval Aviation designators.