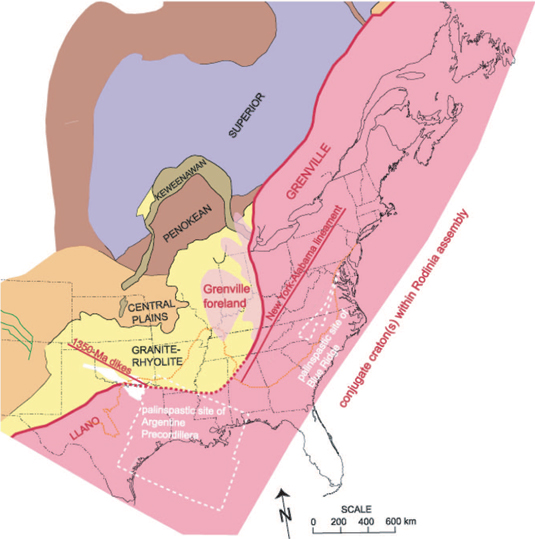 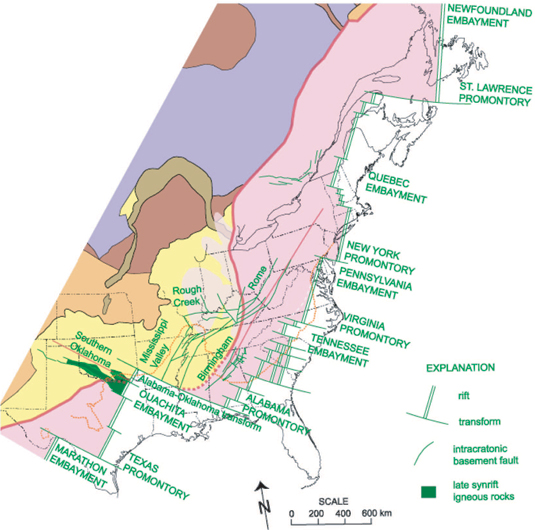 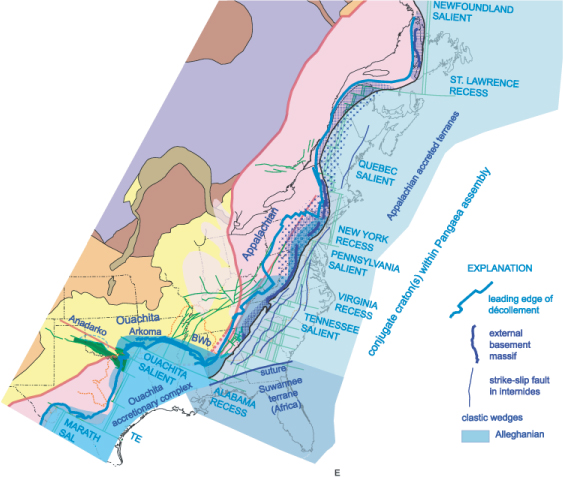 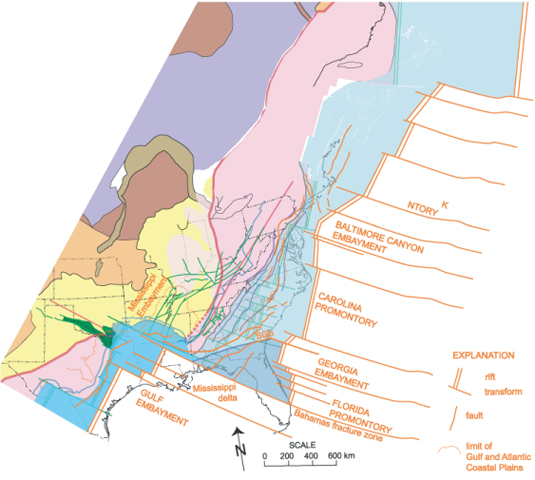 The most accepted tectonic history for the ME region is as follows:

1. The Eastern Granite-Rhyolite Province (1.8-1.6 Ga) underlies the ME, suggesting that Proterozoic basement rocks throughout the region consist primarily of granite and granite porphyry.

2. Initial opening and subsidence of the Reelfoot rift occurred in Early to Late Cambrian time (ca. 565 Ma) in response to the breakup of the supercontinent Rodinia. Rifting extended north into the Illinois Basin. Rifting was not accompanied by major intrusive or volcanic activity.

3. By Middle Cambrian time (ca. 530 Ma), the Iapatus Ocean lay to the south and by Late Cambrian (ca. 515 Ma) the Reelfoot rift was part of a stable continental passive margin, covered by a thick deposit of shallow marine carbonates.

4. Middle Ordovician through Lower Cretaceous (ca. 470 – 90 Ma) sediments are missing from the Reelfoot Rift implying that non-deposition or uplift and erosion occurred.

5a. According to Thomas, Cambrian faults in the Reelfoot Rift were reactivated in the Late Paleozoic (ca. 290 Ma) in response to the closing of the Iapatus Ocean (Alleghanian - Ouachita orogony); the Reelfoot Rift was elevated and the Pascola arch formed, separating the Reelfoot Rift from the Illinois Basin to the north. Intrusive activity along the axis of the MVG accompanied the reactivation.

5b. According to others, reactivation of the ME and uplift of the Pascola arch occurred in Mid-Cretaceous. Intrusive activity accompanied the reactivation.

6. In either case, the ME was elevated in the Mid-Cretaceous, and subsidence began in Late Cretaceous. The northern ME, including the Pascola arch, is presently covered with unconsolidated Late Cretaceous and Cenozoic sediments. The ME may still be subsiding but at a very low rate.