(August 2022)Prof. Christos Kyriakopoulos and Prof. Thomas Goebel led a group of CERI students on a 5-day field trip along the Southern San Andreas Fault (SSAF) system. The group followed the SSAF, with a diversion to visit the Elsinore Fault system, from Bombay Beach (the assumed southern "end" of the SAF) to the impressive displacement features observed in the Carrizo plain (Central California), visiting world class geologic sites and making observations on a variety of earthquake related physical processes. Some highlights included: Standing on top of the fault at the Carrizo plain (probably the most iconic SAF site), manually crushing “pulverized” fault rock to powder along the Mojave segment, cooling our feet in a sag pond, climbing pressure ridges, observing mud volcanoes in the Salton Sea geothermal area, exploring an SSAF geologic trench near Bombay Beach...and many other things.

(August 2022)Dr. Charles Langston, director and professor in the Center for Earthquake Research and Information, was awarded $91,790 from the U.S. Geological Survey for his project “Embayment Seismic Excitation Experiment 2022 (ESEE 2022).”

Dr. Christodoulos Kyriakopoulos, assistant professor in the Center for Earthquake Research and Information, was awarded $67,930 from the U.S. Geological Survey for his project “Characterizing earthquake rupture propagation during the 1811-12 New Madrid earthquakes using dynamic rupture model.”

Dr. Chris Cramer, research professor in the Center for Earthquake Research and Information, was awarded $51,327 from the U.S. Geological Survey for his project “Coastal Plain Amplification and Hazard Model for the National Seismic Hazard Maps: Collaborative Research with University of Memphis, North Carolina State University

(August 2022) Our new R1 post doc Zoya Farajpour was featured on the SSA(Seismological Society of America) website.  She will be working with Dr. Charles Langston.
https://www.seismosoc.org/news/at-work-zoya-farajpour/

(July 2022)Interim Dean Emmert is pleased to announce Dr. Mitchell Withers as interim director of the Center for Earthquake Research and Information (CERI) effective September 1.
Dr. Withers came to the UofM in 1997 as a post-doc researcher tasked with leading the CERI seismic networks. He was promoted from postdoc to Seismic Networks Director in 1998 and to Research Associate Professor and Director of Seismic and Computer Networks in 2002. His research interests include automated earthquake monitoring, real-time data processing, and regional seismic networks management and operations.

(Jun 2022) CERI would like to congratulate Thomas Goebel for his latest grant award. He was awarded $549,995 from the U.S. Department of Energy for his project “Assessing the relative contributions of fluid pressure and elastic stress to induced seismic energy release.”

(April 2022)CERI would like to congratulate Dr. Thomas Goebel for him being awarded the NSF Career Award. For more information visit this link: Goebel Award

[August 2020] CERI has sent a research team to study the aftershocks from the recent 5.1 earthquake near Sparta, North Carolina. For more information visit this link: https://www.memphis.edu/mediaroom/releases/2020/august/ceriteam.php

The University of Memphis Center for Earthquake Research and Information (CERI) is now a core institution of the Southern California Earthquake Center (SCEC). SCEC is a consortium of universities and scientific institutions that performs fundamental research into earthquake processes using Southern California as its principal laboratory. There is substantial overlap of the mission of CERI and SCEC in terms of earthquake science and public outreach. SCEC has functioned as a stand-alone center since 2002 under cooperative agreements with the National Science Foundation and the U.S. Geological Survey. CERI's participation in SCEC will advance knowledge of earthquake processes in the continental interior and increase our understanding of earthquake hazards in Tennessee.

Dr. Christos Kyriakopoulos will be the UofM representative to the SCEC board. More information about SCEC can be found at https://www.scec.org .

[October, 2016] CERI faculty Dr. Christine Powell has won the 2016 Jesuit Seismological Association Award given annually by the Eastern Section of the Seismological Society of America.  The award is given for outstanding contributions to observational seismology particularly towards the understanding of seismology and/or seismotectonics in eastern North America.  Professor Powell has made extensive studies of the major intraplate seismic zones of North America including the New Madrid, the Eastern Tennessee, and the Charlevoix, Canada, Seismic Zones.  the award is named after the Jesuit Seismological Association that operated the first world-wide network of seismic stations in the early 20th Century. Professor Powell will receive her commendation at the upcoming annual meeting of the Eastern Section that will be held in Reston, Virginia, October 23-26, 2016.

[Summer  2018 ] Assistant professor Dr. Eric Daub and doctorate student Khurram Aslam wrote a research proposal to Southern California earthquake center (SCEC), which was approved by funding agency. This project uses dynamic rupture simulations combined with long-term tectonic modeling (LTM) to examine how heterogeneous stresses resulting from dynamic earthquake slip on rough faults influence the pattern of postseismic and interseismic strain accumulation. This work will examine the role of time-dependent healing and velocity-dependent deformation through rate and state friction models to capture the temporal characteristics of the transition from dynamic slip to postseismic and interseismic deformation. The Proposal was entitled "Effect of fault roughness and associated inelastic deformation on postseismic and interseismic strain."

[Spring 2018]Assistant professor Dr. Eric Daub, Dr. Eunseo Choi and doctorate student Khurram Aslam wrote a research proposal to Southern California earthquake center (SCEC), which is a further advancement of their previous year proposal. This proposal was  approved by the funding agency. The SCEC Panel said that this research is conceptually well-aligned with the SCEC objective of reconciling multi-cycle deformation models and dynamic rupture models, as this kind of work ultimately should be useful in earthquake forecasting. The title of the proposal was "The influence of rheology on post-seismic and interseismic deformation on rough faults".

[October 2017] PhD Student Shima Azizzadeh-Roodpish was recognized with the Best Student Oral Presentation award at the 2017 Eastern Section Annual Meeting of the Seismological Society of America for his work titled "Visibility Graph Analysis of Alaska: An Investigation into the Correlation Between b-value and K-M Slope," which she co-authored with PhD student Naeem Khoshnevis and Prof. Chris Cramer.

[June, 2016] PhD Student Mostafa Mousavi has been given the 2016 SSA Student Presentation Award for his paper "Hybrid Seismic Denoising Using Higher Order Statistics and Improved Wavelet Block Thresholding". From among a total of 140 student presentations evaluated by the Student Award subcommittee at the 2016 SSA Annual Meeting in Reno, Nevada, Mostafa was chosen as one of five for recognition. The abstract is available here.

[June, 2015] PhD student Yang Yang has been awarded a scholarship from the Society of Exploration Geophysicists (SEG) for the 2015-2016 academic year. The recognition given to Yang includes scholarship funds from the SEG/Excel Geophysical Services Scholarship, the Fred and Kathi Hilterman Scholarship, and the SEG/Schlumberger Scholarship. 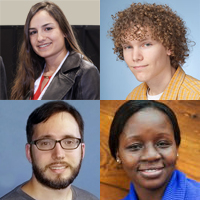 [May, 2015] PhD student Cecilia Nyamwandha received a travel grant to attend the 2015 Joint Assembly Meeting cosponsored by AGU, CGU, GAC, and MAC. This meeting was held May 3–7 at the Palais des Congrès de Montréal in Montreal, Canada. At the meeting she presented a poster titled "What is the Driving Mechanism of Earthquakes in the New Madrid Seismic Zone? – A study of Shear Wave Splitting and Tomography" co-authored with CERI Prof. Christine Powell. The abstract of Cecilia's presentation can be found here.

[April, 2015] PhD student Cecilia Nyamwandha received a Student Presentation Award at the 2015 Annual Meeting of the Seismological Society of America for her poster "Anisotropy beneath the New Madrid Seismic Zone – A study of shear wave splitting."  The SSA Student Presentation Awards recognize excellence in student poster presentations or talks at its annual meeting. The award is given to up to 15% of the number of students presenting at the meeting, whose presentations met an absolute criteria covering the quality of both content and presentation. The abstract of her presentation, co-authored with CERI Prof. Christine Powell can be found here.

[April, 2015] PhD student Naeem Khoshnevis received a travel grant from the Seismological Society of America (SSA) to to attend the 2015 SSA Annual Meeting. The event was held on April 21–23 in Pasadena, California. At the meeting, Naeem participated with an oral presentation titled "Evaluation of attenuation models (Qs-Vs relationships) used in physics-based ground-motion earthquake simulation," co-authored with CERI and Civil Engineering Assistant Prof. RicardoTaborda. The abstract of Naeem's presentation can be found here.

[December, 2014] PhD student Cecilia Nyamwandha received a travel grant to attend the 2014 Fall Meeting of the American Geophysical Union (AGU). The meeting was held in San Francisco, California on December 15–19. At the meeting she presented a poster titled "Crustal and upper mantle velocity structure of the New Madrid Seismic Zone" co-authored with CERI Prof. Christine Powell and Prof. Charles Langston. The abstract of Cecilia's presentation can be found here.

[November, 2014] PhD student Akram Mostafanejad was awarded the Best Student Poster Award at the Annual Meeting of the Easter Section of the Seismological Society of America. Her poster, titled "Average shear wave velocity for the Mississippi embayment sediment inferred from teleseismic P-wave spectral ratios" was co-author with CERI Director, Prof. Charles Langston. The ESSSA meeting was held on November 2-4, 2014 in Charleston, South Carolina.

[October, 2014] PhD students Yang Yang and Blaine Bockholt were selected to attend the SEG/Exxon Mobil Student Education Program. This two and a half days training program includes lectures and exercises effectively conducted and related to the geosciences or to geophysical work performed in the oil industry. ExxonMobil provides course materials, team exercises, and instructors. Participants undergo a rigorous selection process and receive full travel grants to join the program. This year's program took place in Denver, Colorado, on October 24-26, during the SEG International Exposition and 84th Annual Meeting.

[October, 2014] PhD student Akram Mostafanejad was selected to participate in the SEG/Chevron Student Leadership Symposium (SLS). The recognition included a travel grant to participate in a two-day focused leadership program. The event took place during the SEG Annual Meeting in Denver, Colorado.

[September, 2014] PhD student Naeem Khoshnevis was selected to participate in the 2014 Summer School on Earthquake Science, organized by the Southern California Earthquake Center (SCEC) and the University of Tokyo's Earthquake Research Institute (ERI). The event was held on September 28 through October 2, in Oxnard, California. The theme for the program was titled "Wave and rupture propagation with realistic velocity structures". More than 65 applications were reviewed and only 22 U.S. and International participants were selected to join 10 scholars from the US and Japan.