Passage of the EarthScope TA stations across the Mississippi Embayment (ME) provides an opportunity to investigate lithospheric structure associated with active deformation and an ancient, major, intracratonic rift. The ME is a first-order geological structure of the North American continent but the reason for basin subsidence is enigmatic; subsidence began in Late Cretaceous and is not linked to a major tectonic episode. The lithosphere below the ME has a long and complex geological history of rifting, uplift, and subsidence over at least two Wilson cycles. In addition, the active New Madrid seismic zone (NMSZ) is located in the upper crust below the northern ME. We hypothesize that lithospheric heterogeneity ultimately controls the dynamic processes associated with ME subsidence and the NMSZ. We hypothesize further that the mantle lithosphere will show anomalous heterogeneity related to surface features and buried Phanerozoic rift geology. Investigating ancient failed rift lithospheric structure helps constrain the mantle dynamics associated with the rifting process. 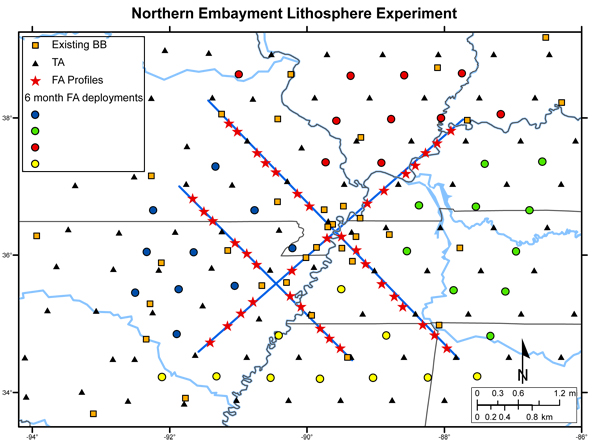 The proposed experiment involving the TA and a FlexArray deployment is designed to provide an overall framework of lithospheric velocity and anisotropy structure both within and outside of the northern ME to depths approaching the transition zone. More detailed variations in deep structure perpendicular and parallel to the ME axis will be imaged using three dense lines of FlexArray stations. The dense profiles will extend within and outside of the ME to allow identification of structural variations that are peculiar to the ME. Major issues we wish to address are:

We will obtain a much deeper understanding of the dynamic processes involved in broad-scale continental subsidence and rifting and how inherited lithospheric structure influences continental dynamics on scales ranging from continental rift reactivation to the existence of intraplate seismic zones. We introduce new methodology for computing receiver functions that can be used in regions covered by thick sediment deposits. This methodology will improve receiver function determinations for TA deployments in regions such as the Gulf of Mexico and Atlantic coastal plain.

One of the major goals of the proposed research is to obtain insight into why the active NMSZ exists. We will make huge strides in our ability to assess seismic hazard in the central U.S. by narrowing down the number of plausible models for the generation of these earthquakes. We may also be able to determine if the NMSZ is associated with unique lithospheric heterogeneity or if concentrated zones of earthquake activity might be expected outside of the upper ME. This research will facilitate direct collaboration among 3 academic institutions and form the basis for collaboration among a large group of investigators within the central United States. At least 5 graduate students will be utilizing data from this experiment for their dissertations and we will be participating in the IRIS summer intern program. Activities and results from this project will be incorporated into CERI's active E&O program that include programs for several thousand K-12 students/year and teacher's workshops. We will also incorporate our work into ongoing projects with regional museums and CERI's Public Earthquake Resource Center.