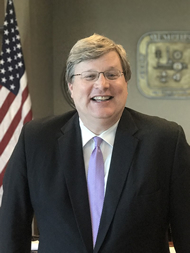 Jim Strickland was sworn in as mayor of Memphis in 2016 and has spent the first two-plus years of his tenure following through with his inauguration day pledge to apply "new eyes to solve old problems." In partnership with the hard work of City employees, 911 call answer times have been drastically reduced; the percentage of city spending with minority and women-owned businesses has dramatically increased; and two major developments — the retention and Downtown move of ServiceMaster's global headquarters and the expansion of St. Jude Children's Research Hospital — speak to the momentum of some $13 billion in recent, current or future development in the region. Mayor Strickland's vision is to reverse population loss through a strategy that reinvests in Memphis' core and its neighborhoods — changing a long-held view that Memphis should grow outward. In his 2018 State of the City speech, the mayor said his administration will focus on "building up, not building out." Public safety is the mayor's No.1 priority.  His initiative to rebuild the Memphis Police Department has resulted in two of the largest police recruit classes in more than a decade and the first annual net gain of officers in seven years. In a new spirit of collaboration, Mayor Strickland's administration and the Memphis City Council have passed each of their first three budgets in under an hour of debate. In keeping with Mayor Strickland's commitment to infrastructure, he has doubled street paving from just four years ago. The state Comptroller and rating agencies have applauded the city's financial condition, a Strickland initiative has helped some 65 families buy homes inside the core city, and a city partnership is helping homeless Memphians get back on their feet.

Mayor Strickland has prioritized a transparent and communicative government — including initiating a weekly email update to citizens that frankly tackles the city's challenges as well as celebrates successes. The improvement of core city services and commitment to transparency and trust are part of what Mayor Strickland calls a "brilliant at the basics" philosophy of city government, where his administration tackles core city services to allow the growth of Memphis to multiply. Mayor Strickland is a 1982 graduate of Christian Brothers High School, a 1986 graduate of the University of Memphis and a 1989 graduate of the School of Law at the U of M. He practiced law at Glankler Brown PLLC from 1990 to 1998, when he began practicing at Kustoff & Strickland PLLC, where he remained until becoming mayor. Mayor Strickland was elected to the Memphis City Council in 2007.He served as vice chairman of the council in 2013 and as its chairman in 2014.In eight years representing District 5, then-councilman Strickland became known for fighting for government transparency and public safety. Community service has long been a part of Mayor Strickland's life. He has served with various organizations, such as the St. Vincent de Paul Soup Kitchen, where he continues to volunteer. He is a gold life member of the NAACP. Mayor Strickland is married and has two children.