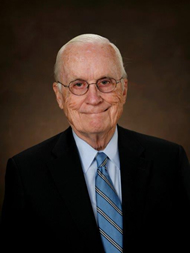 Dr. Waller is emeritus chair of the Department of Ophthalmology, professor emeritus of Mayo Clinic College of Medicine and Science, and retired president and CEO of Mayo Clinic in Rochester. Dr. Waller joined the Mayo Clinic staff in ophthalmology in 1970.He attained the rank of professor, served as department chair, and was awarded the Whitney and Betty MacMillan Professorship. He served on the American Board of Ophthalmology. He received the Lucian Howe Medal from the American Ophthalmologic Society, the highest honor awarded to its members. He was inducted in the Modern Healthcare Hall of Fame, was awarded the Juran Medal by the American Society for Quality, and received honorary fellowship in the Royal College of Surgeons in Ireland. His colleagues in the Doctors of Mayo Society awarded him their Lifetime Achievement Award in 2013 and, in 2017, he received the Distinguished Alumni Award from the Mayo Clinic Alumni Association. Upon returning home to Memphis in 2003, he joined the Board of Trustees of Rhodes College, a position he still holds. Rhodes College awarded Dr. Waller its Distinguished Service Medal and an Honorary Doctorate degree. He also served on the Advisory Council for the School of Public Health at the University of Memphis. Dr. Waller received his undergraduate degree from Duke University and his medical degree from the University of Tennessee College of Medicine. After two years of service at the National Institutes of Health, he entered the Mayo Clinic School of Graduate Medical Education in Rochester, Minnesota, as a resident in internal medicine, then in ophthalmology. He completed a post-residency fellowship in oculoplastic surgery at the University of California, San Francisco. He is the father of three and grandfather of seven.