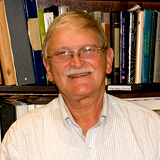 It is with great sadness that the Department of Mathematical Sciences announces that Professor James Jamison passed away on November 28, 2014. With strong determination and resilience he fought a very difficult and heroic fight against cancer that lasted for more than fifteen years. Nevertheless, during those years, he has continued a very active and productive professional life both as a beloved and sought-after teacher and mentor and a highly recognized and respected researcher in operator theory and functional analysis; while greatly contributing as Chair of the department to its notable advancement both within the university as well as at the national level. A member of the department since 1970, he has left an enduring and most valuable print on its development and its professional standing. He has continued to work on his research, teaching, advising while maintaining a regular professional schedule up to the very last days of his life. He will be sorely missed by his colleagues, friends and students. A memorial services was held on Saturday, December 6, at Grace-St Luke's Episcopal Church, 1270 Peabody Ave. Memphis. TN.

An Obituary has appeared in the Commercial Appeal, December 4, 2014. A scholarship in memory of Professor James Jamison is in the process of being created, if you want to contribute to this initiative please make a gift in his memory and restricted to the department of Mathematics Sciences fund at the University of Memphis