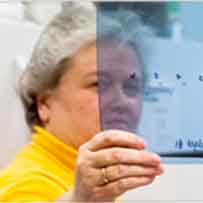 Dr. Cole joined the Department in 2003. She teaches BIOL 4480/6480 Cellular and Molecular Pharmacology. BIOL7140/8140 Receptors and Signaling, and BIOL7000/8000 Introduction to Graduate Studies. She began her research career as a comparative endocrinologist, studying the regulation of calcium and phosphate homeostasis in European starlings. In her post-doctoral work, she became interested in the regulation of parathyroid hormone (PTH) receptors and PTH-activated signaling pathways in kidney and bone. At the University of Memphis, Dr. Cole has continued her work on PTH signaling and has also collaborated with colleagues studying the regulation of cell signaling at host-parasite interfaces as well as the role of the epidermal growth factor (EGF) receptor and its ligands in regulating epithelial cell function. Dr. Cole is a member of the American Society for Bone and Mineral Research, American Society for Pharmacology and Experimental Therapeutics, and the American Society for Cell Biology.

For more information on Dr. Judith Cole, visit her page on the Department of Biological Sciences Website.