Our New Destination for The Arts Is Underway

The University of Memphis and the entire Mid-South are eagerly awaiting the completion of the Scheidt Family Performing Arts Center at the Rudi E. Scheidt School of Music. The Center will provide much-needed facilities for School initiatives and allow us to continue building upon our relationships with other arts programs in the region by hosting many of their performances on our campus.

Your Support Will Change The Face Of Music In Memphis

The new Scheidt Family Performing Arts Center will be equipped with world-class facilities supporting its role as the region's largest and most comprehensive music school. The 82,000-square-foot Music Center boasts state-of-the-art facilities, including a 900+ seat concert hall, expanded stage space, exceptional acoustics, dedicated rehearsal spaces and classrooms and modern music laboratories. The goal is to raise $1 million to ensure students move into the new Scheidt Family Music Center with all the resources they need to succeed. A portion of the funding will equip the Scheidt School of Music with the most up-to-date technology and recording equipment that supports advances such as real-time synchrony with musicians worldwide. Gifts will also be used to purchase instruments and create a borrowing program that will give students who cannot afford instruments the ability to borrow one for a limited time. Enjoy an evening filled with music from the iconic Dionne Warwick and Memphis' next generation of musical legends at the Rudi E. Scheidt School of Music. 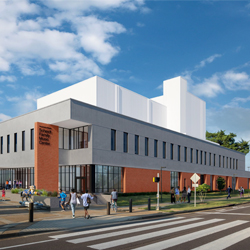 The Scheidt Family Commits $500,000 to create a matching fund to secure donations to support students learning and performing in the new Scheidt Family Music Center.