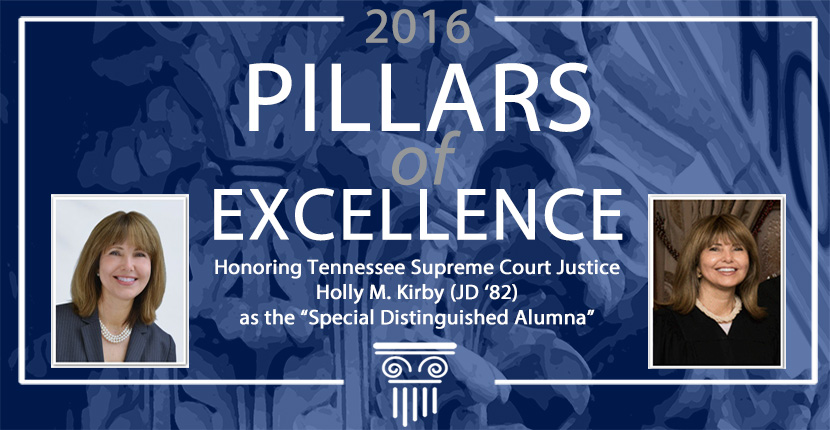 The Cecil C. Humphreys School of Law Alumni Chapter will honor Tennessee Supreme Court Justice Holly M. Kirby (JD '82) as the "Special Distinguished Alumna" at its 2016 Pillars of Excellence Awards Ceremony and Dinner. The event will be held Saturday, August 20, at the University of Memphis Holiday Inn. A VIP Meet & Greet will begin at 5:30 p.m., followed by a cocktail reception at 6:00 p.m., with dinner and awards at 7:00 p.m.

Justice Kirby (JD '82) is an associate justice on the Tennessee Supreme Court. She is the first Memphis Law graduate to serve as a member of the state Supreme Court, which now includes a second Memphis Law alumnus, Justice Roger Page. Justice Kirby was appointed to the court by Gov. Bill Haslam on Dec. 17, 2013 to fill the vacancy created by retirement of Justice Janice Holder. She assumed office on Sept.1, 2014. Justice Kirby is a former judge for the Tennessee Court of Appeals. She was appointed to this court by Gov. Don Sundquist in 1995 and was elected in August 1996.

Justice Kirby received her undergraduate degree in engineering from the University of Memphis and her JD from the University of Memphis Cecil C. Humphreys School of Law. She began her legal career in 1982 as a law clerk to Judge Harry Wellford of the United States Court of Appeals for the Sixth Circuit. She then worked as an attorney in private practice from 1983 to 1995 and later became a partner at the firm of Burch, Porter & Johnson. She was appointed to the Court of Appeals in 1995 and was the first woman to serve on the Court of Appeals.

For more information on the event, visit alumni.memphs.edu and click on the Pillars of Excellence link, or contact Marina Carrier at m.carrier@memphis.edu or 901-678-2461.

Recipients of the Pillars of Excellence Award must be living at the time of selection; must have been admitted to the practice of law for more than 45 years; given significant service to the legal profession, including membership in bar associations and participation in bar association activities; given significant service to the community, including involvement in civic and charitable organizations; served in leadership roles in the legal and civic communities; made other significant contributions to the practice of law; and must be generally recognized among the Memphis Bar to possess the highest legal skills and ethical standards.