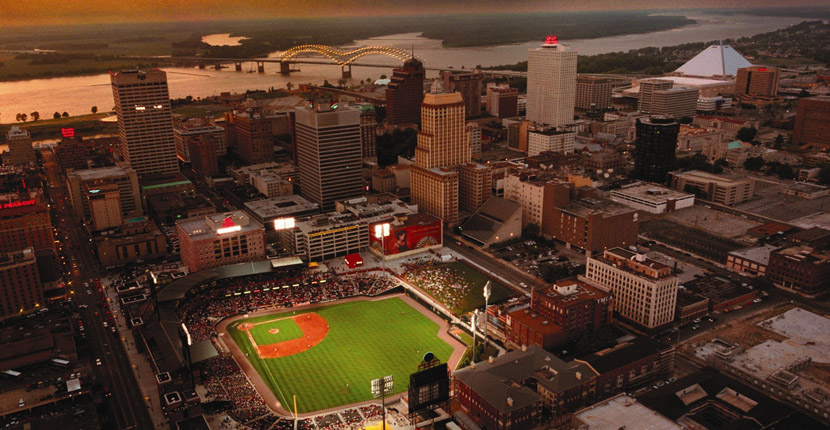 Memphis has long been a basketball town. Many say the city's love affair with roundball began with the Memphis State Tigers' 1957 run to the National Invitation Tournament finals (a time when the NIT was the equal of the NCAA tournament on a national scale). A half-century later, the Bluff City finds itself with two prominent teams to fill their winter evenings, the NBA's Memphis Grizzlies and the University of Memphis Tigers Men's Basketball team under the same arena roof at the FedExForum.

The Memphis Grizzlies finished the 2013-2014 regular season with an overall record of 50 wins and 32 losses under coach David Joerger. Two-time NBA All-star Zach Randolph (Z-bo, as Memphians call him) finished the season averaging 17.9 points per game along with Mike Conley's 17.2 points per game and Marc Gasol's (aka, Big Spain) 14.6 points per game. The Grizzlies made it to the NBA playoffs for the 4th-consecutive season and took the Oklahoma City Thunder to seven games during the first-round of the western conference semifinals that saw overtime in four games.

While undergoing something of a rebuilding year, the Memphis Tiger's basketball program has a long and storied history of success in the Bluff City. Under head coach Josh Pastner, the Memphis Tiger's Men's Basketball team finished the 2013-2014 season with 24 wins and 10 loses and made it to the NCAA Tournament for the 4th-consectuvie year. Overall, 50 former Memphis Tigers players have been selected in the NBA Draft. In 2013, the Memphis Tigers became a member of the American Athletic Conference (formerly the Big East). The Tigers were greeted with a grand welcome that was displayed with video boards in Time Square in New York City.

When the weather gets warmer and the seasons begin to change, so do the sporting events we attend. The Memphis Redbirds are the Triple-A affiliate and owned by the St. Louis Cardinals. The Memphis Redbirds call the nation's top minor league park (according to Baseball America), AutoZone Park their home. This world-class stadium is just a block away from Memphis Law.

During both 2009 and 2010 seasons, the Redbirds played for the Pacific Coast League Championship and are ready for another winning season this year. The 2014 Redbirds season will include fireworks shows, giveaways, theme nights, and entertainment acts with a fun, affordable and family atmosphere. AutoZone Park has recently undergone a multi-million dollar renovation, bringing a number of exciting changes and in-game fun to the 2015-16 season.

The $3 million renovation of FedExPark heralded the return to national prominence for the University of Memphis Tiger's baseball program. The new stadium and clubhouse, which is located on the University's Park Avenue Campus, features new locker rooms, and indoor hitting and pitching areas, and equipment and training rooms in the clubhouse. Coach Daron Schoenrock and his Tigers college baseball 2014 opponents include nationally-ranked Mississippi State, Ole Miss, Louisville and Vanderbilt.

Aside from all the team sports that make the city buzz, there are annual events that make certain months a bit louder, from one venue to another. In February, The Racquet Club of Memphis hosts both the men's and women's professional tennis tours, the only combined Association of Tennis Professionals and Women's Tennis Professionals indoor event in the United States. In 2009, the men's event gained prestige as one of ten 500-level events in the world (a tier below only nine 1000-point tournaments). The U.S. National Indoor Championships men's event in Memphis is one of eleven cities in the world to own the prestigious 500-level men's event. The WTA International Memphis women's event hosts top players from around the world. In 2013, Japan's Kei Nishikori defeated Spain's Feliciano Lopez for the men's singles title while New Zealand's Marina Erakovic defeated Germany's Sabine Lisicki for the women's singles title.

If you prefer a view from the tee, the Memphis metro is home to more than 35 area golf courses and numerous regional courses only a short drive away, including Mirimichi, which is the first course to receive a Classic Sanctuary certification from Audubon International. Annual golfing events abound, with the Memphis Golf Association currently stages five championship tournaments and one Pro-Am.