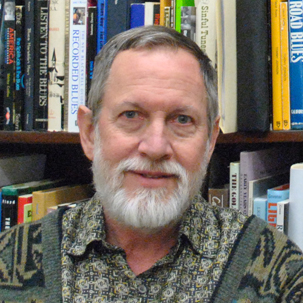 Dr. David Evans is one of the most important contemporary academic musicologists specializing in blues music and is the author of the seminal "Big Road Blues: Tradition and Creativity in the Folk Blues" (1982).  Among his many honors, he has won two Grammy™ awards for "Best Album Notes" and received a Fulbright Specialist fellowship to Ethiopia.  He holds a B. A. degree from Harvard and M. A. and Ph. D. from the University of California, Los Angeles.  Evans is the author of "The NPR Curious Listener's Guide to Blues" (2005) and many other publications.  He has produced more than 50 albums of field and studio recordings, many of them for the University of Memphis's High Water Records.

While studying at UCLA in the 1960s, Evans began making trips to the southern states to research and record blues, gospel, and folk musicians.  He first recorded the singer Jack Owens in 1966 and later produced records by him, Jessie Mae Hemphill, R. L. Burnside, and many other musicians.  As a performer (blues vocal and guitar) Evans has made over seventy international tours to twenty-three countries and has recorded six CDs.