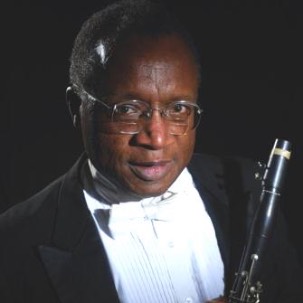 James Gholson, DMA, is retired Professor of Clarinet at the Rudi E. Scheidt School of Music. Since the mid-70s, he was a principal clarinetist with the Memphis Symphony Orchestra and announced his retirement after the 2011-12 season. He holds an undergraduate degree from Michigan State University and Master of Music and Doctor of Musical Arts from The Catholic University. His major teachers include Elsa Verdehr, Keith Stein, Sidney Forrest, and Anthony Gigliotti. As a member of the United States Navy Band, Washington, D.C., he appeared frequently as soloist. Dr. Gholson performs regularly as clarinetist with the Eroica Ensemble and is clarinetist emeritus of the Memphis Woodwind Quintet. Jim is the author of The "Seasoned Clarinetist," "MemNoire," "TIGHT," "Reading Rampage," "FEETS," "Demon in the Milky Way" and the UNITUS (http://www.unitus.org) website. Affectionately called "Dr. G.," James is the 2007 winner of the FLAME award given by the University of Memphis and is a board member with the Eroica Ensemble and Concerts International.