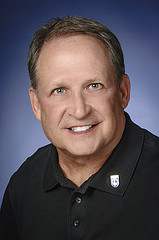 Dr. Andrasik received his doctorate in Clinical Psychology from Ohio University in 1979, after
completing an Internship at the Western Psychiatric Institute and Clinic, Department of Psychiatry,
University of Pittsburgh School of Medicine, under the direction of Drs. Michel Hersen and Samuel M.
Turner. He then joined the Psychology Faculty of the State University of New York at Albany
(beginning as an Assistant Professor and then promoted to Associate Professor), where he also held
the positions of Research Associate Professor in the Department of Neurology and Adjunct Associate
Professor in the Department of Family Practice at Albany Medical College. At SUNYA he assisted in
establishing and co-directing a clinical research unit, the Stress Disorders Clinic, which investigated
both pharmacological and nonpharmacological approaches to varied stress and pain problems. This
unit was housed within the Center for Stress and Anxiety disorders, directed by Drs. Edward B.
Blanchard and David H. Barlow. Upon departing SUNYA, he served as Associate Director for Pain
Therapy Centers in Greenville, SC, where he managed multidisciplinary pain treatment programs at
various hospital sites. His next academic appointment was in the Department of Psychology at the
University of West Florida, where he began as a Full Professor, and subsequently was bestowed the
title of Distinguished University Professor and appointed as a Senior Research Scientist at the Florida
Institute for Human and Machine Cognition. He presently serves as a Distinguished Professor, Director, Center for Behavioral Medicine, Department of Psychology, University of Memphis, TN.

Dr. Andrasik has published approximately 270 articles and chapters and has delivered numerous
presentations in the US and abroad (Austria, Belgium, Brazil, Canada, China, Denmark, England,
Finland, France, Germany, Hungary, Israel, Italy, Mexico, Norway, Spain, Turkey, & UAE). His work
has focused on a variety of topics within the area of behavioral medicine, chiefly chronic pain,
headache, and stress disorders, basic and applied psychophysiology, and more recently polytrauma
in military populations. He has co-authored or co-edited several texts for professionals (one of which
was translated into German and Spanish, with a two-volume set translated into Korean). His most
recent text was published in early 2015, entitled Biopsychosocial Assessment in Clinical Health
Psychology: A Handbook, co-edited with J.L. Goodie and A.L. Peterson. The 4th edition of his coedited
text with M.S. Schwartz (as senior editor), entitled Biofeedback: A Practitioner’s Guide, is
scheduled to appear late 2015/early 2016.

Dr. Andrasik has been the recipient of multiple federal and foundation research grants, including a
Research Career Development Award from the National Institute of Neurological Communicative
Disorders and Stroke (now NINDS) at the start of his career (serving as PI or Co-PI for grants totaling
approximately $5 million to date). He has participated as an external reviewer in the grant review
process at a number of agencies (NIH, NIMH, NASA, NATO, USAMRMC, etc.), serving as a member
of the Risk, Prevention and Health Behavior Study Section (formerly known as the Behavioral
Medicine Study Section). He was the 1990 recipient of The University of West Florida's Distinguished
Research and Creative Activity Award, the 1992 recipient of the Association for Applied
Psychophysiology and Biofeedback's Merit Award for Long-Term Research and/or Clinical
Achievements, the 2002 recipient of AAPB’s Distinguished Scientist Award, and the 2006 recipient of
The University of West Florida’s University Scholarly and Creative Activities Award. Dr. Andrasik has
considerable journal editing experience, currently serving as Editor-in-Chief for Applied
Psychophysiology and Biofeedback (formerly Biofeedback and Self-Regulation) since 1995 and
Associate Editor for Cephalalgia since 2013. In the past he served as Editor-in-Chief for Behavior
Therapy, Associate Editor for Behavior Therapy and Biofeedback and Self-Regulation, and a
member of the editorial board for other leading behavioral journals. He continues as a board member
for several journals and regularly reviews for others.

Dr. Andrasik has consulted in a behavioral management capacity to a number of human service
agencies (mental health, pediatrics, police selection, forensics, military, and intellectual/developmental
disabilities). Finally, Dr. Andrasik remains active clinically. He is licensed as a psychologist (Florida),
is listed in the National Register of Health Service Providers in Psychology, is certified by the
Biofeedback Certification International Alliance (formerly the Biofeedback Certification Institute of
America), has maintained a private practice since 1982, and regularly consults to various agencies.