The Combinatorics Group is rebooting our Combinatorics Seminar. We're planning on having one this Friday, September 10th, at 2:00pm in the Combinatorics Seminar Room on the 2nd floor of Dunn Hall. The Ralph Faudree Postdoc, Chao Liu, will give the talk, Title: The Multiplicative Properties for Zero-Sums. Abstract: In this talk, we will present recent joint work in Zero-Sum Theory by David J. Grynkiewicz and Chao Liu. We investigate the multiplicative properties for Zero-Sums on finite abelian groups of rank 2, which allows us to establish the structures for the extremal sequences that do not contain nontrivial zero-sum subsequences of the relevant short lengths.

The Department of Mathematical Sciences is happy to announce the return of our Weekly Colloquium Series, with the first lecture for Fall 2020 to be given on Friday, September 4.  Also, the Partial Differential Equations Seminar launches this semester with a series of three lectures on geometric flows, beginning Thursday, September 10.  Please check the departmental calendar for further information. 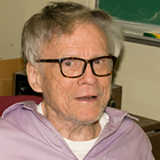 It is with deep sadness that we report that our beloved colleague and friend Professor Cecil Rousseau passed away on April 10. He died peacefully, at his home. He was a mathematical giant who brought distinction to the Department over many years. He will dearly be missed.

Congratulations to Dr. Irena Lasiecka who was awarded the 2020 William R. Sparks Eminent Faculty Award.  This is the highest honor awarded by the university to its faculty members, as indicated on the awards website, hosted by the Provost's Office.

Congratulations also to Dr. Roberto Triggiani,  who received the 2020 UoM Alumni Association Award for Distinguished Research in Science, Engineering, and Mathematics. You may read about all the alumni awards at this website, scrolling about halfway down the page.

Congratulations to Misty Freeman who was selected as a faculty member for one of the statewide dual credit (SDC) content teams who will be creating new curriculum resources for high school teachers. This work will align high school and post-secondary education in Tennessee.

Congratulations to Mathematical Sciences faculty who were recognized at the University's Research Celebration on February 25, 2020.  For being First Time Principal Investigators in FY19, Alpha Ba was recognized for his Dual Enrollment Grant from  the Southwest Community College and Gisele Goldstein was recognized for her CBMS  Regional  Conference at Montgomerry Bell Park. George Anastassiou was recognized for being a 2019 Book Author/Editor.

Irena Lasiecka has been interviewed by IEEE Control Systems Magazine, December 2019 vol 39, nr 6. The interview is posted in the section “People in Control" and gives visibility to several PhD students in the UofM Department Of Mathematical Sciences.

Distinguished University Professor and Chair of the Department of Mathematical Sciences, Dr. Irena Lasiecka, has been selected to be an Eisenbud Professor in the program Mathematical Problems in Fluid Dynamics during the Spring 2021 semester. This will be held at the Mathematical Sciences Research Institute (MSRI) at the University of California, Berkeley. The Eisenbud Professorship is funded by an endowment from the Simons Foundation, in support of the MSRI’s scientific programs. As a part of the program, Lasiecka will be conducting collaboration with other researchers at UC Berkeley in the area of Fluid Dynamics and Applications, as well as mentoring postdoctoral fellows.

Roberto Triggiani has been selected to be a Research Professor in the program "Mathematical problems in fluid dynamics" during the Spring 2021 Semester, at the Mathematical Sciences Research Institute (MSRI), University of California, Berkeley, upon recommendations of the MSRI Scientific Advisory Committee and the program organizers. He will be conducting research work in the area of boundary control and stabilization of fluid equations and fluid-structure interactions. Moreover, he will be mentoring PhD students and Post-Docs.

Congratulations to Dr. Gisele Goldstein who was awarded the UofM 2019 College of Arts and Sciences Distinguished Research Award (CASDRA).

Congratulations to Dr. John Haddock who was awarded the Dunavant Professorship for 2019-2022.

Dr. Irena Lasiecka is the 2019 recipient of the annual Richard E.Bellman Control Heritage Award of the American Automatic Control Council, the highest award of such professional organization. She received the Award on July 11, in Philadelphia, at the annual conference of this society, before a gathering of over 1,000 people. In the 40-year history of this annual Bellman Award, this is the first time that a woman was selected.

Dr. Irena Lasiecka was named a 2019 Fellow of the Society for Industrial and Applied Mathematics. SIAM Fellows are nominated for excellence in research and/or industrial work, educational and community activities, or other forms of achievements related to the goals of the organization. Learn more about the 2019 Fellows recipients. Lasiecka was named a fellow for fundamental contributions to control theory of partial differential equations and their dissemination through numerous invited talks, administration positions in professional societies and the mentoring of many PhD students and postdoctoral associates. She is the first UofM faculty member to receive this honor and only the third in the State of Tennessee.

See the Graduate Students' Awards page for a list of recent awards received by our graduate students.

Congratulations to Bentuo Zheng, who has been awarded a Dunavant Professorship for 2018-2021.

The National Science Foundation has awarded a grant of $892,649 to the University of Memphis to support the project, Collaborative Research: Promoting Success in Undergraduate Mathematics through Graduate Teaching Assistant Training.  This project is under the direction of John R. Haddock (PI), along with co-PI's Tsz Ho Chan, Irena Lasiecka, Fernanda Botelho, and Leigh Harrell-Williams.

The National Science Foundation has awarded a grant of $1,697,556 to the University of Memphis to support the project, Collaborative Research: The Urban STEM Collaboratory — Building STEM Identity and Student Success through Academic, Financial, Social, and Career Support.  This project is also under the direction of John R. Haddock (PI), along with co-PI's Stephanie S. Ivey, Craig O. Stewart, Aaron L. Robinson, and James T. Campbell.  This grant is collaborative with the University of Colorado at Denver, Indiana University, and the University of Michigan, for a total amount of five million dollars. 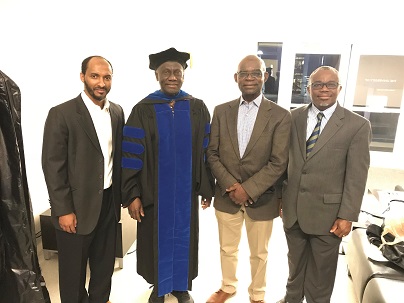 Alpha Ba and Segun George represented the department at the MLK50 Fellows Completion Academy ceremony that was held on February 26, 2018 at the University of Memphis. The University of Memphis Completion Academy for African American Males is a THEC supported grant made possible by Governor Haslam’s acquisition of Lumina funding dedicated to closing racial disparities in institutions of higher learning. Programming to support and accelerate degree completion is the primary focus of this grant which will also emphasize often untold success stories about the college experiences of African American males.

It is with great sadness that the Department of Mathematical Sciences announces that Dr. S.P. Wong, a retired Professor of Statistics, passed away on October 9, 2017. An obituary can be found on his personal webpage and, in memory of his devotion to the mentoring of graduate students, the department has established a new student award for graduate students in statistics.

All of Ralph Faudree's papers have been archived on the UofM library website. We would like to thank Gabor Meszaros and Pat Faudree for making this possible.

The Math Learning Center has moved to Dunn Hall 341 (the old Math Library).

Plenary Talks/Invited course-lectures by the DMS Faculty
The Faculty of the DMS is actively involved in cutting edge research in the mathematical sciences. This is reflected by the several high-visibility, invited talks and course-lectures presented worldwide. Some of the key-note talks and lectures recently delivered/to be soon delivered by the DMS Faculty are given in the above link.

Congratulations to Dr. Segun George who in 2017 was elected as a Fellow of the American Statistical Association.

Faculty and graduate students from the DMS attended a conference at the Leibnitz Institute in Oberwolfach, Germany, November 20-26, 2016.  The topic was Mathematical Theory of FluidFlow Structure Interactions, and some photos are posted here.

Mathematicians and statisticians are listed in top 3 best jobs for 2014.

Dr. Harold Stephens passed away on February 4, 2013 at the age of 93. He was a member of our department many years ago. As a window into the past, here is a history of the department written by Dr. Stephens in 1973.