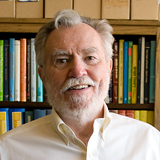 It is difficult to overstate the multi-fold, deep, even transformational impact that Dr. Ralph Faudree has had on the University of Memphis over the past 44 years of his service: as a world-class research mathematician in the area of graph theory since he joined Memphis in 1971; as Chair of the Department of Mathematical Sciences (1983-1994); as Dean of the College of Arts and Sciences (1995-2000); as University Provost (2001-2012), as Interim-President (2000-2001).

Dr. Ralph Faudree passed away on January 13, 2015, leaving an unfillable void. The University of Memphis has paid tribute to Dr. Faudree's service with an announcement on January 14, 2015 to all Faculty Staff and Students by Interim Provost Karen D Weddle-West and President M. Davis Rudd. A University-wide Memorial Service was held on January 17, 2015.

The present obituary is written with focus on Dr. Faudree as a long-time member of, and contributor to, the Department of Mathematical Sciences. In short: it was Dr. Faudree who took a teaching-oriented department in the early 1970s and by virtue of the sheer energy and charisma of his own example as a well-rounded international scholar and a far-reaching vision of the true values of academia, he managed to transform it into a mathematically research-oriented department, with areas of excellence, and a 100% research-active faculty, while simultaneously nurturing, expanding, and enhancing the educational mission of the department. This is the legacy that Ralph Faudree leaves to the DMS and the University of Memphis, to counter his irreplaceable loss. As explicitly noted in the official University of Memphis announcement of January 14, this he achieved through an aggressive recruitment and retention of high-quality faculty; development and implementation of rigorous research standards; development of a comprehensive and demanding tenure and promotion methodology; administration of a meaningful faculty evaluation process.

Dr. Faudree received his Master and PhD from Purdue University in 1963 and 1964 respectively. He then taught at the University of California, Berkeley, and the University of Illinois, before joining the University of Memphis in 1971. Throughout his academic career, Dr. Faudree maintained an active and prolific research program in the areas of graphical Ramsey theory and Hamiltonian theory of graphs. He has to his credit over 250 research papers, 13 published in 2013-2014 and 7 submitted in 2014, a testimonial of his dedication and commitment to the profession and the department.

He enjoyed an international reputation and served as a Visiting Professor at numerous universities world-wide: The University of Twente in the Netherlands, the University of Aberdeen in Scotland; the University of Paris; the University of Singapore; and the Hungarian Academy of Sciences, to name a few. It is at the Hungarian Academy of Sciences that Dr. Faudree cemented his relationship with Dr. Paul Erdős, one of the 20th century's most prolific and respected mathematicians. Their collaboration led to more than 45 joint articles in graph theory. Since Dr. Erdős' death, Dr. Faudree continued the work they had begun together, collaborating with mathematicians in both Hungary and the United States. He also helped to perpetuate Dr. Erdős' work by co-sponsoring the Erdős lecture series at the University of Memphis and by establishing the Erdős Professorship in the DMS. In recognition of their support and regard for Dr. Faudree, Mr. amd Mrs. Jabie Hardin endowed the Faudree University Professorship at the University of Memphis. Only in the last two years, Dr. Faudree has given 6 invited talks and 2 plenary talks at international conferences, the last one at the VII Conference in Graph Theory held in Krakow, Poland, in September 2014. He was a co-recipient of the University's Distinguished Research Award in 1978; the Superior Performance in Research Award in 1986, 1988-90 and 1992-93; the College of Arts and Science Meritorious Faculty Award in 1991; and the Board of Visitors' Eminent Faculty Award in 1994. In 2005 he received the Euler Medal by the Institute of Combinatorics. Since 2012, he held the First Horizon Professorship.

After returning to the Department of Mathematical Sciences in August 2012, following his 11-year term as Provost, Dr. Faudree's highly respected, charismatic, fair, iconic figure was instrumental in the continued success of the department: as a member of the Advisory Committee and the Director of Graduate Studies. He was also most generous with his time, with both students and faculty alike. The DMS has received numerous correspondence from former undergraduate and graduate students who remember him fondly and grieve his premature departure.

His passing leaves a human and professional vacuum for all of us.

All of Ralph's papers have been digitized and stored by the University of Memphis Library. We thank Gabor Meszaros and Pat Faudree for making this possible. Collection of Papers