The George A. Riley Symposium on Public Humanities

Symposium on Public Humanities, "Seeing Civil Rights" will align with the Brooks Museum's exhibit on the photography of Ernest Withers, a prominent Memphis-based photographer. Withers beautifully captured some of the most iconic images of the Civil Rights movement, especially dealing with the Sanitation Workers Strike, the "I Am a Man" campaign and Dr. King's visits to Memphis. "Seeing Civil Rights" will explore how Withers and his contemporaries imagined photography's dual role as an art form and a tool for political change. In a series of roundtables and a keynote lecture, the symposium will bring together historians, art historians, literary scholars, journalists and civic leaders to contextualize Ernest Withers within the Civil Rights movement and postwar American culture. 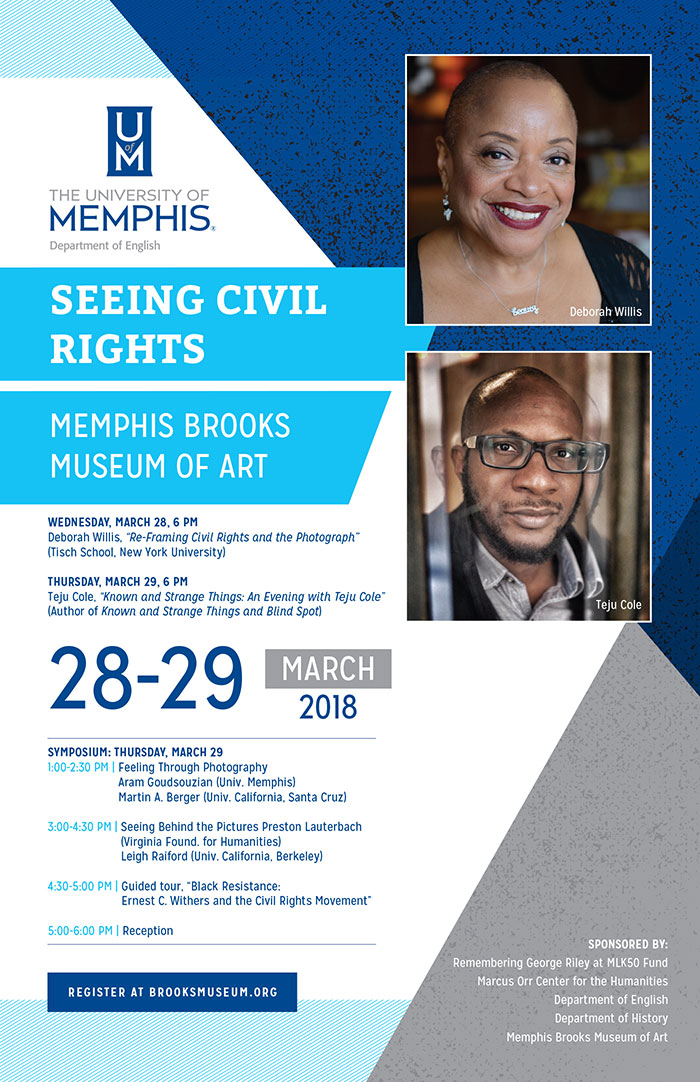 Images, whether journalistic or documentary, are forever fixed in the popular imagination through photography. From the medium’s beginning, race and gender have shaped and controlled the reception of photographic portraits, both politically and aesthetically. This lecture will include works by photographers and change makers who were actively involved in changing the course of photo history and fundamentally re-imagining black neighborhoods to create new narratives and histories for the future.

Deborah Willis, Ph.D., is chair of the Department of Photography & Imaging at the Tisch School of the Arts at New York University. Professor Willis and has an affiliated appointment as University Professor with the College of Arts and Sciences, Africana Studies also at NYU. Professor Willis has been the recipient of Guggenheim, Fletcher, and MacArthur fellowships, the Infinity Award in Writing from the International Center for Photography, and recipient of the Anonymous Was a Woman Foundation Award. Named one of the "100 Most Important People in Photography" by American Photography magazine she is one of the nation's leading historians of African American photography and curators of African American culture. Willis's books include Envisioning Emancipation: Black Americans and the End of Slavery, with Barbara Krauthamer, Posing Beauty: African American Images from the 1890s to the Present, and many others.

In June 1966, a white Memphian shot the civil rights hero James Meredith during the second day of his planned walk to Jackson, Mississippi. Jack Thornell of the Associated Press snapped the image of a wounded, writhing Meredith on the side of Highway 51 – a Pulitzer Prize-winning shot that conveyed black sacrifice, a common visual trope during the civil rights movement. But Meredith’s shooting inspired a three-week march through Mississippi that exhibited a movement at its crossroads, highlighted by Stokely Carmichael’s thunderous call for “Black Power.” As the movement seemed to change, photographers kept shaping perceptions of the “March Against Fear.” The march featured moments of great inspiration, instances of abject terror, and hot-tempered debates among activists. This presentation will explore how, in this particular historical moment when the slogan of Black Power burst onto the American consciousness, photographers both reinforced and complicated narratives of black rage and political fracture.

The most famous photographs from the civil rights struggle were met with a deep emotional response from white Americans: photographs of fire hoses, attack dogs, firebombs, and tear gas wielded against dignified black protestors. This was especially true of northern whites, for whom the photographs helped build empathy for blacks in the South as they advanced social and legislative change. But those emotionally charged images that encouraged a sympathetic response to particular acts of protest also hindered broader structural reforms. This talk considers the emotional pull of civil rights photographs on whites today. It shows how whites continue to experience the iconic photographs of civil rights through an older racial lens, one developed in the nineteenth century.  And, just as in the 1960s, it suggests that photography that encourages empathy for individual acts impedes the systemic changes that would help create a more racially country.

Panel 2: Seeing Behind the Pictures

In 2010 it was uncovered that along with being an indispensable and original photographer, Ernest C. Withers was a paid FBI informant from least 1968 to 1970. One day after the 50th anniversary Ernest C. Withers’ iconic images of the “I AM A MAN” march in Memphis, this talk examines Withers' complicated dual role as civil rights journalist and civil rights spy, culminating in a discussion of Withers’s photographs of the march and the riot that broke out that day.

“Known and Strange Things: An Evening with Teju Cole”

Teju Cole was born in the US in 1975 and raised in Nigeria. He is the author of two works of fiction: Every Day Is for the Thief, which was named a Book of the Year by The New York Times; and Open City, which won the PEN/Hemingway Award. His most recent books are the critically acclaimed essay collection Known and Strange Things and the synthesis of lyric and photography, Blind Spot. He is Distinguished Writer in Residence at Bard College and the photography critic for The New York Times Magazine.