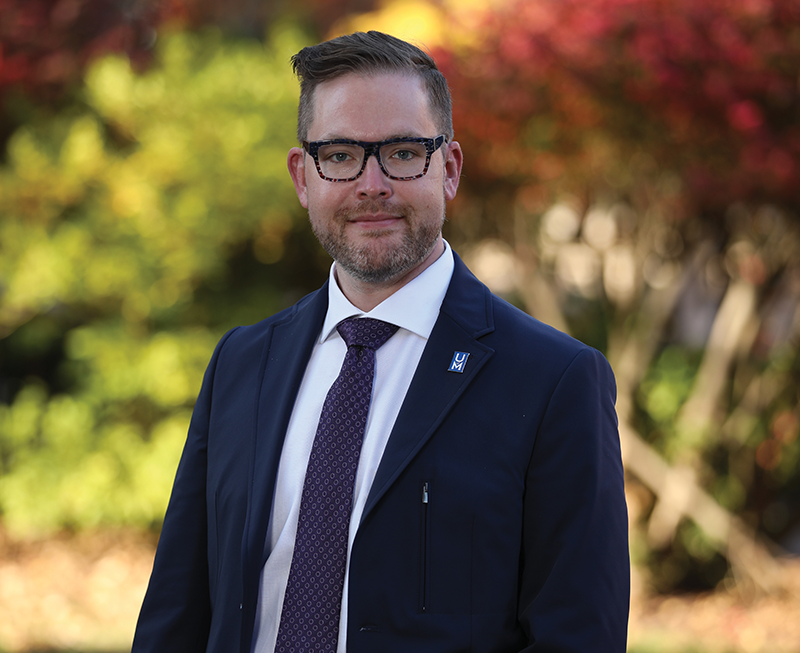 With a tenure that started in fall 2020, Department of Theatre & Dance Chair Jacob Allen was tasked with guiding his department through what may have been its most tumultuous year to date.

“It’s a challenging and yet very gratifying time to step into this position, due in part to the COVID-19 pandemic,” said Allen. “I’ve learned quickly that it’s necessary to be flexible, and our students and faculty feel the same way. I’m very proud of the planning and the work that our department has done to ensure that we are still able to provide an effective, safe and fulfilling education to our students, even throughout the crisis.”

As a director and performer, Allen has worked extensively throughout the Midwest and New England in a range of productions that includes My Fair Lady, Guys and Dolls, The King and I, Fiddler on the Roof, Little Shop of Horrors and Anything Goes.

“I have been involved in musical theatre from a young age,” he said. “I started taking piano lessons at age 5. My mother was a classically trained soprano, while my father had a background in choral directing. Together, they founded a community National Gilbert & Sullivan Opera Company.”

Allen’s academic accolades include the 2014 Thomas W. Briggs Foundation Award for excellence in teaching, the University of Memphis' highest honor for excellence in the classroom. In addition, he is a former CCFA Dean’s Fellow for Research.

Allen joined the UofM in 2010 as assistant  professor and head of music theatre in 2010. When he first arrived in Memphis, there was no BFA music theatre program in Tennessee or any state touching it.

“When that initial job description came across my desk 10 years ago, it was like it was written just for me,” he said. “The opportunity to found, build and grow a new music theatre program within a very established existing department was just too good to miss.”

Now in its ninth year, the musical theatre concentration spearheaded by Allen has grown, reaching an enrollment of 48 students in the program since it officially launched in 2011 with a production of Phantom of the Opera that sold out in mere hours. More recently, music theatre achievements include the 2019 production of Be More Chill, a show that opened before the Broadway production and had to be created with special permission from its original producers.

For Allen, the new concentration proved to be a great success and a hopeful sign of things to come for the department at large.

“It’s been a great joy to see that challenge fulfilled,” he said. “But now, I’ve been given the opportunity to become chair and utilize my skills for the entire department and sort of look at ways to nurture and develop all of the programs offered by the Department of Theatre & Dance.”

As incoming chair, one of Allen’s key objectives is to change significant parts of the existing course load to reflect where the industry is headed.

“In terms of the curriculum, we started by thinking about what skills the artists really need,” he said. “While there is a lot that remains the same in terms of the artistic training, so much is changing in terms of the use of technology and media in theatre. We’ve always been responsive to that, but that change is happening more rapidly than ever.”

When it comes to what makes a brilliant student in a department that thrives on curiosity and art for art’s sake, Allen said the difference maker often expresses itself behind the scenes.

“Anyone who comes to the Department of Theatre & Dance as a performer or in a technical role loves putting on shows,” he said. “But a lot of the work of developing those productions happens not on stage, but in the rehearsal process and in the classroom. The students that find joy in that process equal to the joy that they find when giving a bow after a successful performance are far and away the ones that get the most out of their educational experience.”