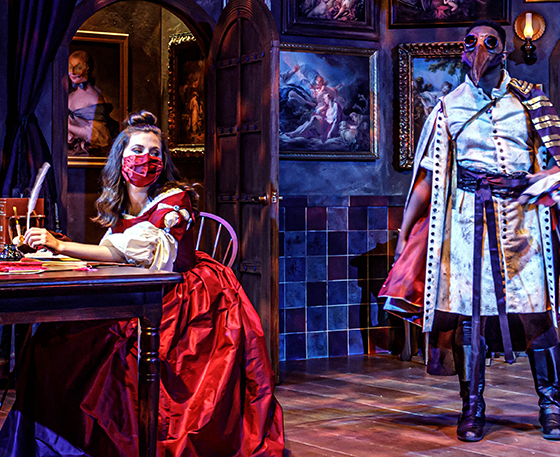 In an era of face masks and social distancing, nothing on the university of memphis campus said “Sign of the Times” quite like the state of the Central to the Arts Hub for most of 2020. While last year’s issue of Voices touted the dome-shaped building at the corner of Central Avenue and Patterson Street as a gateway to the UofM art scene that would soon provide student artists and musicians an opportunity to display and sell their work in a pop-up gallery format, the Central to the Arts Hub was transformed into the Health Center Hub. This walk-up COVID-19 testing center was established in spring 2020 under the guidance of Dr. Jane Clement and Campus Health Services.

But despite the air of uncertainty surrounding the pandemic; students, faculty and staff banded together to maintain some form of normalcy. The following stories showcase just a few of the many ways that members of the College of Communication and Fine Arts deftly adapted to the global crisis in an effort to bring the best possible education to students.

Department of Art provides materials to crafty students in quarantine

The University of Memphis Department of Art Education helped students stay creative at home with a new “Art Education From a Box” program.

“I wanted to make sure that all of my students had an opportunity to participate in hands-on art education projects in addition to the written work they were doing,” said Dr. Bryna Bobick, associate professor of Art Education.

Toward the end of March 2020, Bobick raided her closet to fill an array of shipping boxes with strips of felt, paints, different kinds of paper and vintage National Geographic magazines. To get these boxes in the hands of students, Bobick sought permission and assistance from Richard Lou, professor and chair of the Department of Art. Students would submit their work weekly to be posted to the UofM Art
Education Instagram.

“We had more than 50 students submit their mailing info on a volunteer basis,” she said. “It’s been a great way to stay in touch with our students and get the word out that they are still making art, even in spite of a pandemic. The reception and the support have been fantastic. The students have enjoyed it.”

In addition, the Department of Art’s annual Spring Graphic Design Show, a showcase of work from graduating UofM seniors, premiered entirely online for the first time.

Conferencing from the Couch

One of the earliest cancellations related to the COVID-19 pandemic was the Department of Journalism and Strategic Media’s 45th annual Association for Education in Journalism and Mass Communication (AEJMC) Southeast Colloquium, a three-day academic research conference that was to be held March 19-21 at the FedEx Institute of Technology. About a week before the conference, Dr. Matt Haught, conference director and assistant chair of the department, made the call to shift the entire program to an all-digital format.

“This is not the letter you were supposed to read,” his program-opening letter to conference participants began.

Haught’s letter would then detail how the conference would continue and virtually accommodate the 140 attendees and 150 presentations on a range of media topics in six categories: electronic news, history, magazine media, newspaper and online news, law and policy, and visual communication.

“We started to see the dominos falling, and suddenly the whole University was shut down around spring break,” he said. “At that point, the plan to move things to Zoom were already in motion.”

Haught credited the department’s existing graduate studies program, which meets virtually using a real-time, asynchronous format, for serving as a model for the colloquium.

In addition to hosting one of the University’s first all-virtual conferences in the early days of the pandemic, students with the Department of Journalism and Strategic Media launched a new podcast series titled “Life in Quarantine: Our Stories from the New Plague.” The podcast; which was developed under the guidance of Dr. Robby Byrd, assistant professor of Journalism and Strategic Media, as part of a course on innovative storytelling; examined the impact of the COVID-19 pandemic on local establishments through the lens of UofM students.

The Rudi E. Scheidt School of Music garnered national attention early in the pandemic when it teamed up with Circle Music Center to bring pianos directly to the homes of more than a dozen homebound students.

“For many students, purchasing these instruments on their own absolutely wasn’t an option,” said Dr. Artina McCain, coordinator of piano studies. “So I reached out to Circle Music Center to get an idea of their inventory, and then Dr. Jonathan Tsay and I began to work on dispersing them to our students. Circle Music jumped into action very fast. The idea came up one day and deliveries started the next.”

Students received the pianos on indefinite loan as part of a plan devised by McCain; Tsay, piano studies professor; and Dr. Kevin Sanders, director of the Rudi E. Scheidt School of Music.

Chuck Taylor, general manager with Circle Music Center in East Memphis, is credited with organizing the delivery efforts and expediting the loan process to get a variety of pianos to the homes of local students, a value worth tens of thousands of dollars.

“Artina McCain and Jonathan Tsay, under the new leadership of Kevin Sanders, approached us and asked if we could help out with students who might be quarantined or choosing to stay at home,” said Taylor. “So we got right into striking a deal that would allow them to keep up with their studies as they transition to online coursework.”

Lucas Scott Smith, undergraduate piano performance major, was among the first to receive a piano in the form of a Yamaha upright. Smith was among the participants in the fifth annual Memphis International Piano Festival and Competition Concert, which was hosted online this fall for the first time and included all that piano enthusiasts have come to expect from the event, such as a virtual collegiate masterclass, awards ceremony and winners’ recital.

The Show Must Go On

While many theatre groups across the country were shuttered, the University of Memphis Department of Theatre & Dance conceived its own fall 2020 Jubilee season comprised of a mix of virtual and outdoor performances created specifically for the age of the coronavirus. For the safety of the cast and crew, social distancing took place in staging and masks were worn throughout rehearsals, along with a myriad of other safety precautions.

These performances kicked off with "Or", a play of sex, intrigue, danger and laughter directed by Moises Hinojos and livestreamed to viewers in early October, followed by Lest We Forget: Black Memphis History Through Dance/Theater, a journey through space and time that explored 120 years of Black Memphis history through a series of on-campus, outdoor performances in mid-October.

“We basically had to redo our entire 2020-21 season over the summer,” said Jill Guyton Nee, director of dance and associate professor with the Department of Theatre & Dance. “When it came to discussing what could possibly work for our dance program, I immediately thought of being outside and the many site-specific dance works that have been held in the past. It’s something I’ve done as both a choreographer and a performer before, so I figured we should try to make a whole show of it.”

Further performances include “Zoom in on Comedy,” an all-female series of solo comedy segments with Zoom-based sketches directed by Angela Schultz that took place in early November and “Trouble in Mind,” a smart satire directed by Jamie Warrow about one woman’s stand against the harmful stock stereotypes that diminish African Americans that streamed to viewers in mid-November.

The season wrapped up with “The Story and the Teller,” a Zoom performance directed by Holly L. Derr and written by native Memphian and current New Yorker Calley N. Anderson. This final performance of the season followed the resident acting company of a local Memphis theatre tasked with devising a play about the impact of the 1878 Yellow Fever epidemic on African Americans and immigrants.