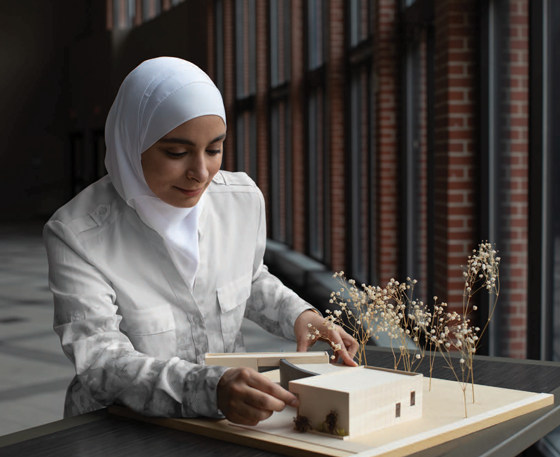 Design is design. That’s what UofM student Razan Hadidi said is among the most important of the lessons she learned from her time in the Department of Architecture.

“What that basically means is that, as architects, the element of design has to be in everything we make,” said Hadidi. “Whether it’s a tiny coffee mug or a huge mansion, it all starts with a design and a draft.”

This is the mentality that earned Hadidi recognition from the likes of the International Society of Furniture Designers, where her Tea Treasure Box design won the top award in the "Student - Occasional Storage" category in the Innovation + Design furnishings and lighting design competition sponsored by the ISFD. The box was originally designed for the 2020 AIAS Silent Auction at the AIA Memphis Gala and Celebration of Architecture, which was canceled due to the COVID-19 pandemic.

“I know there’s this notion that architects are stuck in a building and think about how they’re put together all day, but many of us thrive in other fields that people might not expect,” said Hadidi. “But the field we’re in, in some ways, is all-encompassing. If you know the basic concepts and principles behind design, you can put together anything.”

In addition to her AIAS Gala win, Hadidi also took home a Student Award of Distinction from the American Society of Architectural Illustrators’ "Architecture in Perspective" competition later in 2020 thanks to the striking dimensional illustrations she created for the final project in her Computer Apps 1 course.

“It is exciting to continue to see architecture students excel and be recognized in so many areas including art, design, architecture and more,” said Michael Hagge, chair of the Department of Architecture.

“My uncle always wanted to do architecture when he was young, but he ended up going into pharmacy,” Hadidi said. “He always said if he could do it over again, he would pick architecture.”

After earning her associate degree in interior design from Penn Foster College, Hadidi came to the University of Memphis to pursue the dual-major BFA in Architecture and Interior Architecture in a program she describes as tough, but rewarding.

“It’s a lot of work, but also a lot of fun,” she said. “It’s a pretty small, close-knit family. Because of the studio-style education they use, we all really get to know each other from day one. You get a lot in terms of course load, but also a lot of help from experts who are out there doing it for a job.”