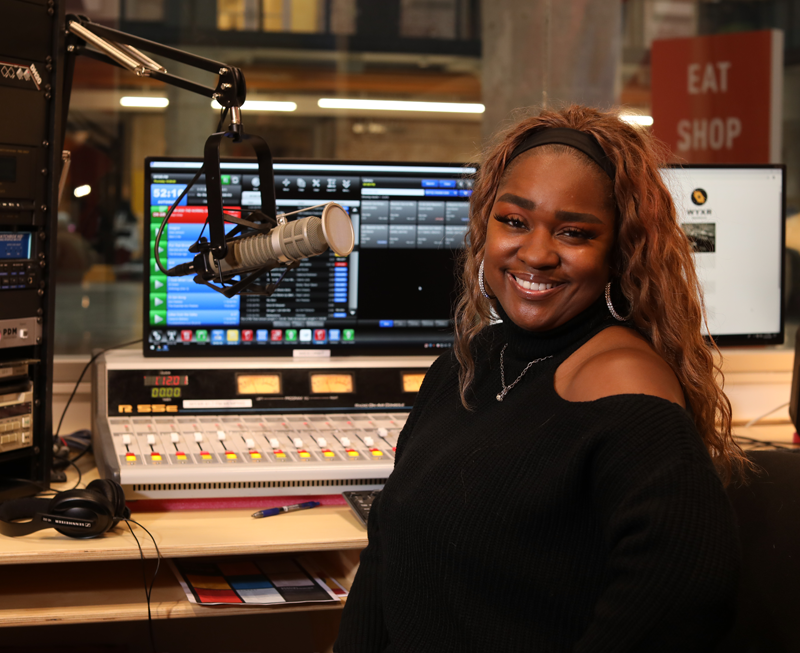 Meet the faces behind WYXR-FM, the new wave of radio in Memphis

The very first thing listeners heard when WYXR-FM burst onto the airwaves at 5 p.m. on Oct. 5 was the unmistakably groovy sound of “Suzy” by legendary Stax recording artist Frederick Knight. For program manager Jared Boyd, the choice was emblematic of things to come for the rebranded radio station.

“We wanted to start off with a blast and make it feel fun by sharing some of our favorite records with the community,” said Boyd. “The kick-off was a fun, almost pirate-radio style introduction. We wanted it to feel fresh, new, underground, vibrant and, most of all, true to Memphis.”

Now several months following its debut, the collaborative nonprofit radio project between the University of Memphis, Crosstown Concourse and The Daily Memphian now known as WYXR has gained following locally and across the globe through online streaming.

Boyd, a former news reporter and co-host of Beale Street Caravan, came onboard in May 2020 by way of The Daily Memphian. As program manager, his duties include finding programming and creating a program schedule representative of the ideals and mission of WYXR.

“First and foremost, it’s all about figuring out what can be a great launching point for programming,” said Boyd.

His work includes finding dedicated volunteers who can add their unique voices to the experience of WYXR, whether they be musicians, DJs or even talk show-style hosts. Robby Grant, executive director of WYXR, credits the presence of a devoted team of volunteers for a strong launch.

“We can’t do it all, but we’ve been fortunate in the sense that we’ve already gotten so much help from the community, from helping to organize volunteers, handling technical and creative stuff, to archiving materials,” said Grant.

Among the station’s newest contributors is 24-year-old Kix Patterson, a graduate student with the Department of Journalism and Strategic Media. Patterson is the host of MEM Underground, a weekly program that profiles the best punk rock music in Memphis.

“I’ve done a bit of radio work in the past, production-wise,” said Patterson, who started his career in radio in the small town of Iuka, Miss., as a high school student. “Since then, I’ve always been looking for different ways to get my voice out there.”

In addition to MEM Underground, Patterson serves as the voice for many on-air advertisements and sweepers for WYXR. Patterson said he hopes to continue to work with the station as it expands to create exciting opportunities for students from various disciplines outside of the stereotypical radio personalities.

“Podcasting and audio storytelling is such a big trend right now,” he said. “And not only does it allow an opportunity for students to come together and learn the craft, but we’re also able to cross disciplines and talk about real subjects from different fields of expertise within the University such as politics and mental health.”

“The space is awesome,” said Boyd. “We’re now answering phone calls, taking meetings in person, and really getting things going in the space.”

Terris "T.K." King, the newly appointed instructor/coordinator of student radio with the Department of Journalism and Strategic Media, was hired in fall 2020 to serve as an advocate for student involvement with the station by giving a voice to interested parties.

King's own career in radio spans more than 20 years across popular local stations like K97, 600 WREC-AM and HOT 107.1, where she hosted “T.K. in the Midday.” In addition, King has worked the news desks at television stations ABC24 and UPN30, as well as taught broadcast journalism for Shelby County Schools.

“Radio has always been my first love,” said King. “And those of us who have been in radio for a while really have a responsibility to help that future generation of broadcasters. Let them push the buttons and get that real-world, firsthand experience.”

To help coordinate content-creation efforts between the UofM and WYXR, King formed a student radio advisory group comprised of nine students from different walks of life, including graduate and undergraduates from music, journalism and law programs. She eventually hopes to grow the group further through involvement with the Student Government Association.

“We want our students to really have a sense of ownership over the content they’re producing,” said King. “I see them getting excited about it, and that makes me excited. They’re building things their own way and when they get together it all sounds like a big, busy project ready to pop off.”

In addition to WYXR, the station hopes to launch a campus stream broadcast on the internet that will be fully student-programmed. For more information on WYXR, visit wyxr.org or tune in to 97.1 FM.